Wow, what a day!  I got to the blind around 9:30 on Friday morning.  The snow geese were flying north in enormous flocks riding on a strong south wind.  Our spread looked good, but we had a major problem with the setup.  The lake was still frozen over and the pump was not operating.  The repair order had been placed, but it was not yet pumping water.  There was only one other hunter, so the two of us stood most of the morning and watched as thousands upon thousands of snow geese headed north.  In addition, I had never seen so many specks.  We’ve never seen this many of this breed of goose in the fall, and the feeling is they go through at night.

To the west of our set up is a series of wetlands with shallow water and weed.  The geese started into those wetlands and they formed what looked like a tornado spiraling down to the ground.  With binoculars we could see the density of this mass of birds.  It was hard to estimate the quantity, but it had to be in the many thousands. 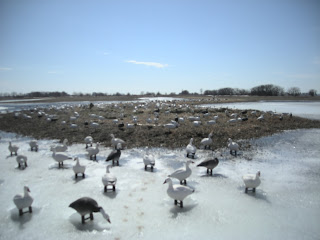 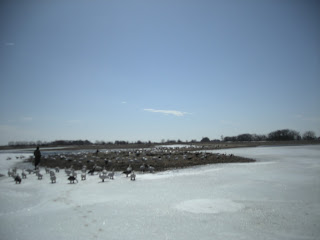 The two pictures are of the spread.  Notice the water.  It is pure ice that went to the bottom of the lake and it is pure white.  The snow geese came toward the blind and then veered off.  This was the result of the frozen water.  The lakes to the west of us were open and the snows just piled in there.

The weather changed again.  I only hunted one day because of the ice on the pond and the well being inoperative.  Monday the weather stayed cold, but the well was put back in service.  As the weather started to warm up and stayed warm at night, the lake melted.  It had some help from the pump.

Wednesday morning the lake was 100% ice free, and we had a strong south wind with warming temperatures.  The snow geese continued to fly north, but they couldn’t go too far as the snow line started just south of Sioux Falls with two feet of snow plus on the ground.

I have been looking forward to hunting with my good friend John as he usually brings his dog Junior.  Junior is a chocolate lab and he is really strong.  Hunting with a good dog just adds to the enjoyment of the hunt.  I love the smell of gunpowder in the morning.  We will see what the next two days produce.