Click on the banner and go direct to Gander Mountain for great buys.

I awoke really early the next morning after taking a drubbing on Waubay Lake.  Sometimes you eat the bear and sometimes he eats you.  I was eaten yesterday, but the call of a new lake that I had never fished was inviting.

Several trips ago I met some fishermen from Minnesota.  Imagine that.  Two fishermen fishing South Dakota when they live in a state known for excellent fishing and a walleye haven.  They told me there was not the competition in South Dakota, but I feel it is pretty heavy at times on some of the lakes in the Webster area.   They had been fishing a newly opened up lake named Hazeldon and it was close to Webster.  They had pulled out sixteen to eighteen inch walleye and a limit of four each in about two hours.  I liked the sound of sixteen to eighteen inch fish and the action was fast, which was even better.

The lake is not big and it is divided into two sections.  The northern section is almost impossible to access.  You have to go through a very narrow channel that is very shallow and full of stumps. There are other problems if your boat gets hung up.  Fishing alone, I was not about to try that access.  The people at Sportsman Cove told me boats had damaged motors and gotten hung up in the mud trying to access the northern arm of the lake.  Check with the people at Sportsman Cove before going there.

The southern half is relatively narrow and is only 863 acres with a maximum depth of 19.7 feet.  It gets deep relatively quickly.  The boat ramp is on the south end of the lake and the water level is relatively shallow.  The dock is okay, but the access to the ramp and dock is not paved or graveled.  It is just a dirt road.  In rainy weather, this lake would be out of the question as the access is steep and you could  easily get stuck trying to get your boat out.  Also parking is limited to about 15 boats, depending on how people park.  The road up to the access is one lane gravel so if you meet someone coming out or in, depending on your direction, you have a minor problem of someone getting by.  Knee high weeds are on each side of this lane.   Having said all this, I am sure everyone reading this has probably asked themselves, “Why go there at all?”  It is the obsession to catch a limit of the “eyes.”  To see a good drawing of the lake go the the following website and select Hazeldon Lake – Day Co. (http://gfp.sd.gov/fishing-boating/tacklebox/lake-maps/default.aspx) 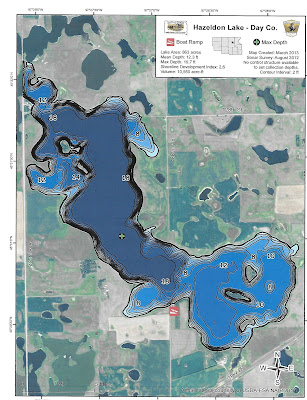 Notice the boat ramp marked in red.  The lake is long and narrow with steep bank drop offs into deeper water.  Most of the lake is 18 to 20 feet deep.  To the right of the lake is 12 feet of water and it was recommended not to fish there.  Because the lake is so small and fertile, I believe the locals will fish it out in no time.

I was on the lake by 7 AM and the only boat to hit it that early.  The sky was a low overcast and the wind had come up probably around 10 to 15 mph out of the southeast.  This provided a good drift and a chartreuse spinner was selected with a crawler.  I started working up the northerly shore moving the boat between 12 to 18 feet of water.  Off the weed line, soft taps were picked up, but no biters.  The wind continued to pick up and boat control was a bit of a problem.  Rods were switched to an ultra light with a chartreuse jig and leech.  After about 90 minutes of not catching anything, the boat was moved to the southeast shore line, and north of the boat ramp.

The wind was a little calmer, but there was a good drift.  I switched back to the spinner and crawler, but kept the ultra light rod working the water.  When the boat got into 15 feet of water, Wham!  A hit was taken and a 13 inch walleye was landed.  Moving on up along the shoreline another and another was taken, but no keepers.  The boat was moved back to the starting point and positioned out to the 18 to 19 foot level.  An old walleye fisherman told me that when you catch small fish on a location, that is all you are going to catch in that area.  I think that is true as I have experienced size similarity depending on the location.
Into the deeper water the spinner was dropped to the bottom then lifted about 2 feet above it.  At this point,  I slowly drifted with the wind along the bank using the trolling motor to keep the boat parallel to the wind drift.  Wham!  Another fish was nailed and it was a 17 inch fish.  Just what I wanted.  Now to limit out.  The boat was moved back in the general area where the fish was picked up and it was Wham!  Another fish was landed.  This one was about the same size.  Not wanting to risk dropping it, the catch was not measured.  Now the plan was to keep working this area.  It took a little time and another fish was picked up.  However, the bite was starting to get soft and I was sure they were going to turn off.  This one was measured and it made the 15 inch minimum.  One more was all that was needed.  Thirty minutes later my legal limit was caught and it was all over for the day.

It was 11 AM and to get the four fish had taken four hours.  By the time the boat was out and the fish were cleaned back at the motel, it would be lunch time and time for a short nap.  A person needs to reward himself once the limit is reached.  The plan was to go back to Waubay in the late afternoon and catch and pitch anything that would hit.  After all, I came to fish.