Last winter when it was cold and miserable outside while sitting by the fire staying warm inside, researching and reading something interesting was the order for the day.  I enjoy the history channel  programs.  One program really caught my eye and it was called “Swamp People.”  Hunting alligators looked really dangerous and took a lot of skill.  Getting hooked was easy and every week the program was watched with fascination. 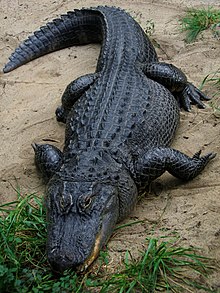 On a trip with our favorite tour company in South America, alligator was part of the buffet among other things that were not very interesting.   A number of the people in the group tried it out, and it tasted really good.  I can truthfully say it reminded me of chicken.  It did not taste like chicken, just reminded me.  Locking the experience away, the research was started to see what would I have to do in order to have the experience of an alligator hunt.

I was amazed at how the locals of the area hunted these big prehistoric monsters.  It was assumed that they slipped quietly through the swamps and when eyes poking up were spotted, they blasted them with a high powered rifle in the head.  That is my preferred method of harvesting big game and most important dangerous game.  From Buffalo, to Hogs to Bear, never give them a chance.  Those animals can put a really bad hurt on you short of death.

They baited them by hanging a piece of chicken from a limb on a really bad and big looking hook and then periodically checked to see if the bait was chomped down on and the hook swallowed.  As the hunter approached the location where the bait was tied, there was no movement.  After the hunter picked up the line and started pulling it toward him, the water parted and the devil himself rose up to take a chomp out of the person who did this to him.  The fight was on.

It was amazing how a person could hold onto those enormous gators.  I saw sizes up to 11 feet and they were really angry.  When the gator’s head was in the right position next to the boat, it was shot with a small caliber bullet right in the back end of the head.  It was amazing.  The big animal went totally limp after all that ruckus it raised.  Hauled into the boat, these beasts were enormous.

I talked to my wife one day about going on an alligator hunt, and as she walked away to take care of some business, I am sure she said, “go ahead, I don’t care.”  To this day, it has been assumed, she did not hear me, or did not want to hear.  Anyway, the research was on.

Learning about your quarry and who they are is one thing that should be done before going after something of this nature.

The American Alligator (Alligator Mississippiensi) is the largest reptile in North America. As I watched all the shows on TV, they looked greenish black to me but they are apparently black of color. The color of the water where the shots were made might have been the reason for the color  Big head, long tail, and a round body with short thick limbs make them easy to spot. That huge tail enables the monster to propel itself through the water. and the tail accounts for almost half the length of the beast.

Their diet is mainly fish, turtles, various mammals, birds and other reptiles.  There are approximately 5 million gators in the U.S.  Florida has an estimated 1.25 million with Louisiana second.  Based on the article I read, their range appears to be moving northward.  Wait till they get to Iowa.  When father winter sets into the prairie, it will all be over if they make it this far.

The big gators are very territorial and will defend their territory.  I don’t know against whom, unless it is another big creature or a hunter.  They live in freshwater such as marshes, wetlands, rivers, and swamps.  Mating season is April through May.  I thought that hunting season would be during this time of the year, but not so.

The female will lay about 25 to 50 eggs and they generally hatch around mid August. What was really interesting was how nature determines the sex of the creature.  Temperatures of 86 degrees during incubation produces females and temperatures of 93 degrees produces males.  After they hatch, that is the sex they will become.  I am sure there must be other creatures of the wild that experience the same type of sex determination.

First stop was Florida, and a good place to begin the research and find an outfitter that would meet my requirements.  The state is plush with possibilities, and since Pam decided to go and we would be taking coolers and driving, we then focused on Louisiana.  This state is number 2 in population and the Alligator is the state reptile.  If you are on the east coast, go to Florida.  You will find an outfitter to meet your needs.

I started out with lodges with all the amenities, but moved off of that idea as there were not many of them. Some really plush vacation spots were found, but I just want to kill an Alligator.  We are not looking for a week long swamp experience in an exquisite and expensive resort.  Most of what I found was in the New Orleans area and there were lots of options.  One was really interesting and I would have to book a year in advance.  At my age I may not be around next year, and so moved on to look at another option.  The hunt at this location was basically a day, with guide, boat, and lunch provided. When talking with the owner, he wanted to know how big a gator I wanted to kill.  Having no idea, I said one that is representative of the area, but at least eight feet.

There is a season in September when the beasts can be hunted.  Licenses are required and being an out of stater I had to buy the out of state license.  What was interesting was all of the outfitters charged for my wife to come along, and that was $250.00 extra.  She is coming with me as we intend to dine on some Cajun food, and she is in charge of the camera.  We are planning on killing one.

The outfitter we selected was Louisiana Marsh Adventure in Braitwaite, LA 70040.  Phone is 504-684 3432.  You can also locate them on their website at (www.louisianamarshadventures.com).  Ask for Mike. I found him very informative and helpful.

What Pam and I want out of this experience is to harvest a gator that is representative of the size for the area.  We also want some alligator meat, the head, and the hide.  I found out that I can buy a head and hide from Mike and take that with me home along with meat that is pre-packed and frozen.  Otherwise, head and hide would take some time to get tanned and processed.  We decided to come back with a hide and head that was on site.  That way we would not have to wait to get the animal back.

The hide will be given to a friend of mine that has a hobby of leather working.  He is looking forward to getting the hide. Hopefully he will make alligator purses for our wives.  The head will go on the mantel above the fireplace in our lower level.  Right above it is a picture of a very beautiful country pond.  The head will be very fitting there and make a good conversation piece.  We have friends that are looking forward to the meat.  They are good sports will and gag down most anything.