It was time to head west.  My wife, Pam, and I loaded up the truck and headed to Idaho on September 23rd for the Elk hunt at Juniper Mountain Ranch near St. Anthony, Idaho.  After twelve hours of driving we checked into the Comfort Inn in Rock Springs, Wyoming.  We did not even take a map, but fed the addresses of the places we were going into the navigation unit in the truck.  After that we just let the nice lady in the dash direct us on the way.  The truck is equipped with a navigation unit from the factory.  We all know what it is like to have one in your vehicle.

Next morning the nice lady in the dash (navigation unit) headed us toward Jackson, Wyoming and across Teton Mountain Pass.  Now this is a thrilling experience for a flat lander from Iowa.  There is nothing to going up, but coming down the other side is frightening for people like us.  I had the truck all geared down and was still pumping the brakes periodically.  Looking in the rear view mirror the traffic behind me looked like it was backed up all the way to Jackson.
When we got to a place where we could pull over, the locals went around me waving with one finger.  This must be a sign of “hello” and “thank you”, common in the state of Wyoming.  Wow, these people really drive fast down that mountain pass and we saw a lot of tail lights flash on as they rounded the curves ahead of us till they were gone.  I believe a person who wants to start a business in the area should consider brake repair and replacement.

Once to the bottom we were in Idaho and headed north to Driggs and Tetonia. Then we went west and north up the road the lady in the dash told us to take.  I am familiar with this area as I have hunted with Bob Barlow of Barlow Outfitting for elk and bear. Now here is where it gets interesting.  We were on the right road to the ranch, but the navigation unit took us to someone’s very large home and the lady in the dash said we had arrived and navigation was discontinued.  What is a mother to do.

I rang the bell and a very nice person came to the door and told us we were heading the right way and the landmarks to look for.  Shortly after that we arrived at the ranch.  In this case the navigation unit was wrong and took us short of our destination.  We later found out UPS was having trouble delivering packages to the ranch. 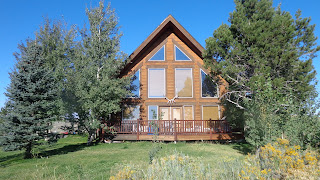 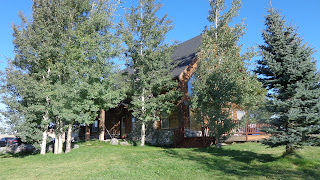 Here is our home for the next few days and we were met by the ranch dog Jackson.  A chocolate lab 10 years old and we had a lot in common with Jackson.  He has arthritis due to age and so do I. 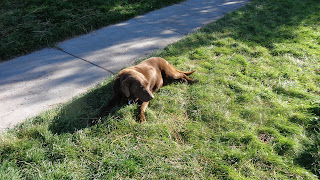 Here is Jackson.  Living a dog’s life soaking up some sun and taking it easy and waiting for his next meal or someone to come along and scratch him here and there.

Next we were met at the door by the ranch manager, Mike Smith, who welcomed us to the ranch and took us to our room where we could deposit our gear.  The room was really nice and as advertised it had a full bath and was big and comfortable.  Next we enjoyed the main room in the lodge, met the other hunters that would be staying there and most important, two really nice ladies that prepared all the meals.  The food was outstanding and there were three big meals a day.  Pam and I do not eat like that anymore.  When we were younger we could have packed it all away but now it just packs around our midsection. 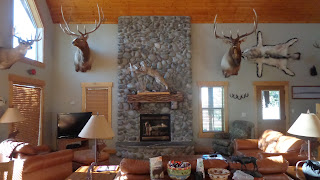 Good view of the main living area.  Dining area is behind me. 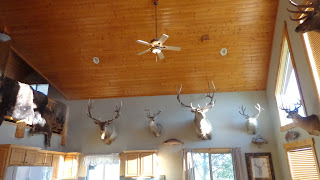 The main area was full of some of the finest mounts I have ever seen.

Now that everyone was here, we went out and shot our firearms and sighted in the rifles.  This is a great idea to make sure your shots are where you want to put them when looking through the scope. After that it was dinner.  Everything was then explained on how things would work.  We were assigned our guides.  Breakfast was at 06:30 and we would leave the lodge at 07:30 to hunt.

The hunting area was similar to my trip to Colorado near Craig several years ago.  Wide open with a lot of sage brush covering the country side.  We went out in a 4WD pick up and headed up a narrow road to try and spot some elk.  The terrain was not what it seemed to be as we looked at it from a distance.  It was way more rugged than it looked.  The process was to move along slowly and look at the sage brush.  The elk will lie down in the morning on the side of the hill in the sun and all you will see is the horns sticking up. 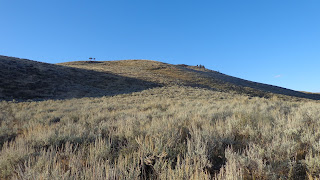 This is typical and the sage brush will be up and over your knee and to the waist in some areas. 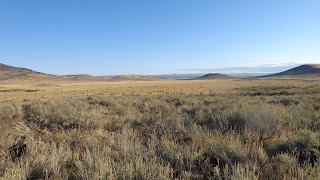 It is wide open country. 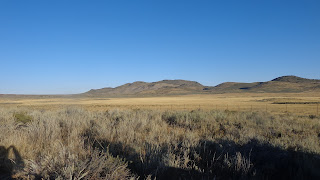 Everywhere you look you have the beauty of the open country and the clear blue sky.  The photo does not capture how blue the sky was.  In Iowa we don’t have that type of scenery.

We kept creeping along the narrow road and stopped periodically to glass the country side.  When all at once not more than 20 yards and up along the side of the road a really nice elk jumped up and took off.  He did not go more than 30 yards.  I looked him over and his antlers had great symmetry and he looked really beefy.  He had a good looking rear end and generally a good looking meaty body.

I said, “I like him.”  The guide said take him if you want to, but we have not really looked over the herd.  The discussion at our orientation was make sure the bull you select is the one you really have fallen in love with as there are a lot of choices.  You pay by how the animal is scored. Pam and I were not looking for a trophy animal and we do not have any shoulder mounts.  All the elk harvested have been for meat with a good looking rack and are European mounts. I shot one trophy and he was tougher than an old boot.  I was told by Mike Branson with Wind River Outfitters to shoot a young bull with a nice rack because you will have the best eating.

The symmetry of the antlers and the fact he was so good looking just convinced me that this was the bull for us.  I asked Pam how she felt about harvesting him and the response was, “This is the one for us.” I would look no further.  My guide asked several times, “Are you sure you want this bull?” He finally said he could not find a thing wrong with him and he had worked at the ranch for over ten years.

The wind was dead calm.  The sun was right in his face so he could not wind us and I believe he was having a hard time seeing us.  I could hardly look into the sun.  We are at 4,800 feet and it is considerably brighter here than back home.

The animal kept moving ahead of us.  When we got to within 30 yards of him he stopped and stared.  Our guide said to take him if he is the one you want.  We stopped and I got out of the truck as quickly as possible and without using shooting sticks, I laid my elbow where the mirror protruded from the truck and brought him into view with the scope.  He immediately turned and walked 10 more yards and turned and looked at us.  He did not run.  After I pulled my sight into the sweet spot, he turned again and stuck his backside at us.  I thought he would trot off.   The guide made some noise that I cannot describe and he turned to the left and was somewhat broadside and stopped.  I did not put a range finder on him as I was going to take a shot the first chance I felt would bring him down.  I felt he was now out about 75 yards.  As I pulled right behind the left shoulder he turned again but it was too late to stop the round as it was on it’s way to the elk.

The round went in right behind the rib cage at about a 30 degree angle so it would travel through the vital areas.  He took three steps and went down.  We slowly walked up to him to make sure he had expired and he was dead.

Pam came up and examined him and said what a beautiful boy he was and look at all the fine looking meat on him. 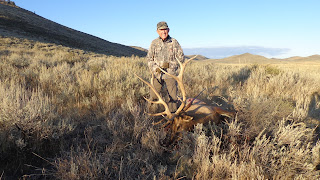 Look at the symmetry in the antlers. 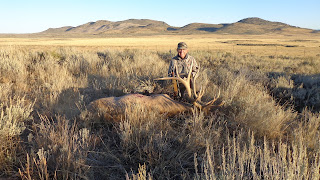 Look at the nice big body on the young boy. 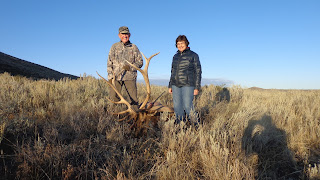 Pam really liked this elk and there is nothing better than having your wife go with you providing you have really nice facilities. 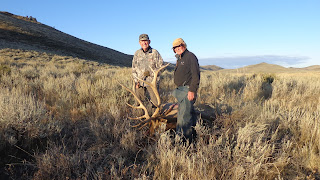 Our guide John who did an outstanding job for us.  He would not let me help him gut the boy out and when we got back to the ranch, he did everything by himself.  Outstanding preparation and when you get this type of service you feel good about the tip.

There he is all hung up and waiting for the skinning and head removal.  Once skinned and the head removed, the ranch quartered him and took him to one of the finest processors in St. Anthony I have ever experienced.  We asked for half pound packages of the burger and the steaks packaged for two people.  We did not take any roasts, but had it all ground to burger.  We eat a lot of burger as it is easy and quick to fix and our friends like the burger best.  We do not share the tenderloin as we eat them ourselves.  How is that for being selfish?

Matt’s Meats in St. Anthony, Idaho did an outstanding job for us.  We got all the meat home, and it was hard as nails.  No loss at all due to thawing.  They did everything just the way we wanted, and I cannot say enough nice things about this business.  These people really know how to take care of you.

Every once in a while you have a really great and memorable experience, and this was one of them.  I cannot find one thing wrong.  We were both pleased with the whole adventure.