There he is already for the skinning and being sent to the processor.
Just look at the meat on him.  We have friends that will be well pleased.

This was amazing.  The elk was harvested in the first hour of the first day and after it was gutted, skinned and taken to the processor, we had nothing to do.  Our guide said to Pam and I, ” What do you people want to do as I am yours for the next several days?”

We had to wait for rigor to set into the animal and then have it processed.  That would take a day and a half and we would pick up the processed elk on the third day from Matt’s Meats in St. Anthony, Idaho.  I previously discussed how strongly we felt about the people and the procedures at Matt’s.  This business is outstanding and the people are right there ready to help you and make sure you are satisfied with their work.

Shop Under Armour + Free Shipping on $35+

With the west entrance of Yellowstone only 60 miles away, we decided to take a drive up to the park and look around, grab lunch and then be back in time for dinner.  My first trip to the park was 52 years ago when I was a boy.  Most of the roads were single lane, and the animals were thick.  Bear, elk, buffalo, and moose were right along the side of the roads.  Signs were posted not to feed the bear, and they would go right up to your car and look for a handout.  As I remember they were all black bear and we never saw a grizzly.

My next visit was 35 years ago with my wife and son. My, how things had changed in such a short period of time.  Animals, it seemed, had all but disappeared, although we saw some buffalo at an extreme distance and a few cow elk.  There were two lane roads everywhere and we had to stand in line to get up to see anything.

Since it was late September we assumed there would be no crowds and we both could look around, have lunch, and be back in time for dinner.  Wow, this was not what happened.  The park was packed with people and at times we were stopped in traffic.  Later as we crept along there was a cow elk standing across a stream by the road, and people were stopping their cars to take pictures.  Both lanes were stopped and shortly came the park service with lights on and got the traffic moving.  After having just shot a beautiful bull elk, a solitary cow was of no interest.  Anyway, we had both seen plenty of cow elk.  Show us a giant bull and we both would get excited. 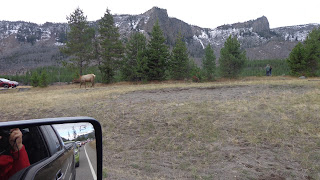 She is over there if you look real hard

Next the traffic came to a mere crawl.  Lo and behold, there was a really nice bull buffalo by the side of the road munching on some grass.  What was more interesting was there was a woman who had moved to at least within 15 feet of the animal and was taking pictures.  Other people were gathering around and we wanted out of there as quickly as possible.  They must be used to the people because I have hunted buffalo and you do not get close. 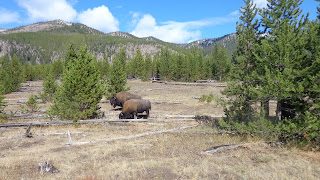 I was amazed how close people would get to these animals.

In South Dakota when I shot a really nice bull several years ago, we stayed out 1000 yards while we stalked him to get into a downwind position.  There were three of us in the procession.  The three of us walked in single file until we were within 300 yards of the beast.  At that point the outfitter said, “You have to take him from here as we will go no closer because he may come over and stomp the living daylights out of us.”  That was my longest shot.  One thing to keep in mind; it is like shooting at a billboard.

Anyway, those people messing around that animal put their lives at risk as buffalo are not a cuddly animal and especially a big bull who may decide he has had enough of being bothered.  We were out of there in short order.

Old Faithful Inn had really changed and Pam and I recognized nothing.  We did make our way to a bench to watch the eruption of Old Faithful.  Right on time it spewed hot water.  That was a little surprising too.  Maybe there is a reader out there who has seen the eruption lately.  This one was nothing like I remember as  boy and a young man with my family.  It could not have gotten over 50 feet high and there was just a spewing noise. 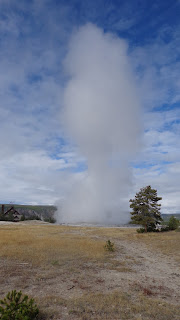 I have seen better eruptions in my younger years.

When Pam and I had visited the park years ago, the thing really spewed skyward and made a lot of noise.  Maybe this was just a weak episode and it still does its magnificent thing, but we were disappointed.  After a quick lunch and with all the people, we decided to head back to the ranch, take a nap and wait for dinner.

Back at the ranch we ran into our guide and we discussed our experience at the park.  He said he had not been there in decades as it was just too crowded.  There were some hunters at the ranch that were hunting cows, or I should say shooting cows because the ranch has an over abundance of them.  One of the hunters had crippled a cow with a gut shot and the animal could not be found.  We were invited to come along and see if we could find where she had gone to lie down and die.

At the general area we started walking among some of the tallest sage brush plants I have ever seen.  In some places they were like small scrub trees and were taller than Pam.  The area was crisscrossed with various game trails and the cow could have taken any one of them and curled up under a sage brush plant to die.

Our guide and a guide from the group sent us off in a direction they thought the animal might have taken off to lie down.  Pam and I would spread out about 15 yards apart and move forward looking under all the plants we could see.  After going about 100 yards, we would make a sweeping circle back to the original starting point.  We found nothing and not even a fresh track.  There was no blood trail since the animal was gut shot and the group would just have to find it.  It wasn’t meant to be and the animal was never found even though there was plenty of effort.  The critters of the plains need to eat too.

Back at the ranch it was getting close to evening and our guide wanted to drive around the ranch and look for big giant bulls.  We found them and it was truly amazing how beautiful some these animals were and the development of their antlers was truly amazing. 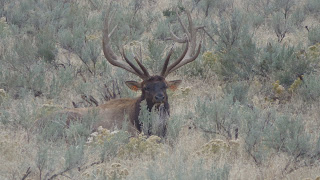 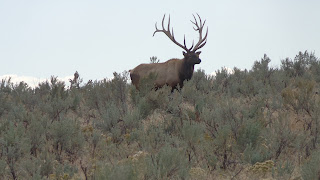 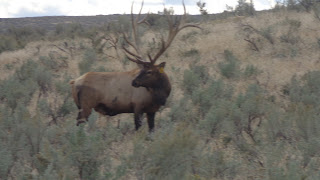 These three bulls are truly magnificent, and if you are looking to kill a really big animal this is the place to come.  Pam said, “I bet those are really tough.  The young ones eat better and for us that is what it is all about.”  I cannot disagree with that statement.

In a large mixing bowl, beat eggs with milk. Add bread crumbs, Parmesan cheese, parsley, and garlic powder; mix well. Add ground meat and knead with your hands until well blended. Form into meatballs about the size of golf balls. Brown the meatballs on all sides then put them in a pan of spaghetti sauce and simmer, covered, for an hour or more.  We like to cook them all day in a crock pot with plenty of sauce.  A good Merlot will finish off the meal.  Serve with pasta.