Fall turkey season arrived and I needed to wait until the deer hunters had filled their larder.  My favorite spot north of Fort Calhoun Nebraska was still available, but with the pay to hunt fields right adjacent to my favorite spot, things had gotten really lean.

The nice thing about hunting turkeys in the fall is that you can shoot either hens or toms and there are always more hens available and some are really big.  In Nebraska you can harvest two birds in the fall.  Not so in Iowa.  With my favorite turkey spot moving down the ladder, it was off to a newly found place.

Last spring I had two really great experiences on hunting spring turkeys on new ground. No one hunted this ground and the landowner had given me a key to let myself in when I wanted to hunt birds.  How much better can it get than that? I had great luck last spring and was feeling very confident that I would have the same luck this fall.

I harvested this bird around 10 a.m.  An old turkey hunter told me that most big birds are harvested between 8 a.m. and 12 p.m.  He was not the biggest one I saw on the hunt, but he was respectable.  The day before I had fouled up an opportunity on the biggest turkey I had ever seen.  There are a lot of birds on this farm and they are all nice size.

I drove out one morning and got to the farm around 08:30.  I had this all to myself and I kept patting myself on the back. I pulled into the gate and paused for about 15 minutes as I have seen birds coming out of the steep hills to my left.  It can pay just to wait a little bit and see if something happens. 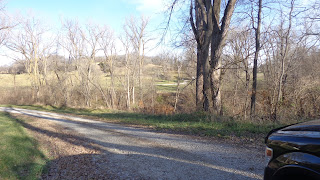 Nothing happened.  It pays just to wait a little bit and let the woods settle down and something might step out that would look good on the platter.  Not this time. After parking the truck, I headed back to the site where the tom was shot last spring.  The reason for this was the birds had come out of the woods and crossed the open fields to the next set of timber across the valley.  The bank is really steep in this location and I pushed myself  in between two standing trees.  My leaf suit has a lot of green in it so it was not worn this time.  I merely had on brown pants and coat and my head and face covered.  It would sure be nice to know what colors turkey could see. 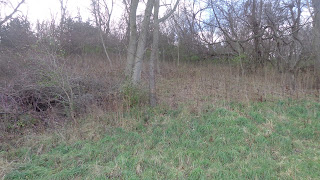 My hiding spot was not the best, but a hunter could see well and still be mixed in with the timber and ground cover.  This was where I shot the tom last spring. 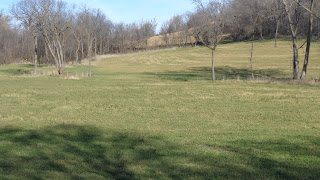 If you look to the left of the picture there is a row of trees that follows a shallow drainage ditch toward the hill in which I am hiding.  Birds had moved down that tree line heading straight for my hiding place last year.  The game plan was to be where birds were seen running in the spring.  Is that good or not?  I do not know, but it is a good place to start.  Anyway, I had the whole farm to myself and could move around to different locations.

What is amazing as I sat there for an hour was that I did not see one deer.  Usually deer are moving from the timber behind me across the fields in front to the woods to the east.  The ground is a venerable grocery store with lots of game roaming around.  The landowner hunts the deer, but no one else hunts the ground besides me.  How much better can it get than that.

Nothing happened so it was time to move.  I moved straight across from a hill with pine trees at the top and crop ground right behind that. 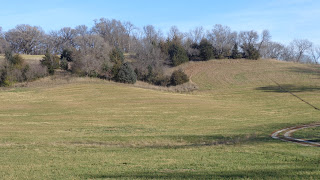 I have seen turkey move along the tree line at the top of the hill.  To the right of the picture you can see a pine tree. I nestled myself back in against that tree.  It was a little awkward, but being well hidden was the first order of business.  If the birds came up along the tree line, which they had done before, they would be easily spotted.  By facing uphill I would be able to spot anything moving down the tree line from the small corn field.  Getting myself really comfortable was a little difficult, but it was accomplished.

What a beautiful day with light breezes and warm temps while sitting somewhat in the sunshine.  My eyes began to droop and I was having a hard time staying awake.  I generally bring my Kindle along and read while sitting and waiting for a bird to appear.  This time I didn’t and fell sound asleep.  I guessed it must have lasted 30 minutes, but will never know if something passed me by.  Hens will make a small purring sound and you can hear that if you are close.  That happened to me one time before along the river bottom and the birds went by me.  A shot was made after waking up on a nice size hen.  Nothing like that happened on this day.  It was time to move on.

East of the farm house is a deep ravine, and a dam stretches across backing up water to form a small lake.  There are a number of dams along the length of ravine forming some nice looking water.  Walking across the top of the dam, tracks and droppings were spotted going both ways and so this should be a good place to hide out.  It was early afternoon when the move was made. 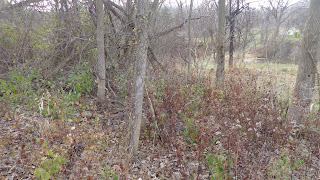 If you look to the center right you can see the lake with the dam to the left.  Just beyond the edge of the brush, the trail is very steep and it was here and along the dam where the signs were found.  Pushing my self back into the brush, it was possible to find a spot where good visibility was possible toward the dam and in the front of me.  The plan was to sit here for an hour and see if something came out of the woods behind me or along the top of the dam.

The weather could not have been more beautiful.  Sitting in a comfortable position again, I felt my eyes droop and soon my head began to nod.  This time the fight was on to stay awake and see if something came up along the top of the dam and up the trail.  The whole time that I was on the farm, not one deer was seen.  After sitting at this location, it was time to give it up.

The next morning I was up before the crack of dawn.  This was the last day of the turkey season in Iowa and I had waited too long to get up to this farm.  The reason was that so many birds were seen in the spring.  The belief is this would just be a “turkey shoot.”  Determination for the last day was running high and it was dark when I left the house.  It was like being on a mission.

The plan was to head to the northwest corner of the farm and hide out at this location at daybreak.  Traffic in the spring had really been strong as they moved south to the hills and timber to the west.

The picture below shows the first spot. 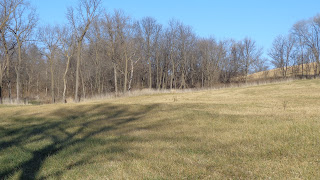 This shot was taken after leaving the location for other places.  Nothing came through. 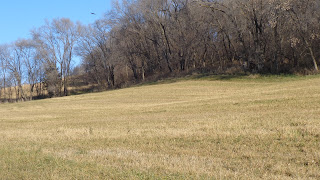 The above picture is the second location.  Turkeys in the spring would work along the tree line and then move up the hill to the right of the picture.  Right in the middle of the tree line and back about ten yards in the woods, a hiding place was found.  Nothing came by and no sounds were heard.  Also, there was no evidence birds had lately ever been near this location.  That was a bad call, and the clock kept ticking to the end of the season.

The third location was where I had hid the day before.  In the spring, turkeys also came out of the woods at this location and pecked there way across the fields to the wooded areas on the east side of the farm. Sitting at this location did produce some excellent entertainment as deer just poured out of the woods to my right not more than 15 yards away.  I was downwind from them, but they knew something was not right.  One looked straight at me and you could see her sniff the air trying to figure out what was there.

Then came the usual huff a couple of times and she would stomp her foot.  Then standing still like a statue, she would stomp her foot again.  Finally she turned and walked off and moved out to my front about 30 yards.  There she stood and stared.  Other deer came out and would stop and stare then move on.  If a person was hunting does, this would have been the spot to have been as a dozen deer came out of the woods to my right and passed by me.  That was really entertaining, but I was there for turkey.

Look at her getting ready to give the ground the big stomp.

There is another one that came out of the woods and just briefly stared and left.

From this location I moved east across the dam on the ravine and tried the location there.  The pictures are up above.  By this time, I was loosing the spirit and had reconciled myself to the fact that this was a disaster, and I was skunked.   A call was made to the landowner and thanked him for allowing me to hunt his ground.  He was amazed that a really nice big hen or tom had not been harvested.

I will be back in the spring. The great fall turkey hunt was a disaster.

Paste the link below in your browser and enjoy.  Sent to me on Facebook.

Slice cucumber into matchstick pieces and set aside. Cook turkey breast in an oven/frying pan/on the grill. Allow to cool completely. Use a rolling pin or other mallet to tenderize the turkey breast (this is where the “bang” comes in!). After meat is tenderized, use forks to shred the meat. Combine cucumber sticks with shredded turkey and arrange on a small serving plate. Combine soy sauce, sugar, chili oil, pepper and creamed peanut butter. Pour sauce over turkey, garnish with scallions and sesame seeds.