A couple of  decades ago the refuge at Desoto Bend was a stop over for the migrating snow geese and other birds.  I knew some farmers that cultivated some of the refuge and they were required to leave 1/3 of the crop on the ground.  Well to waterfowl, corn is like cocaine and they will gorge themselves on it.  A beautiful facility was erected with viewing areas out over the water where you could come and see all the migratory wild fowl.  It went unused for several years, but now the birds are back. There is not a few thousand but hundreds of thousands of snow geese with some blues mixed in, and my wife and I drove up to DeSoto Bend to see the birds.  It was phenomenal. 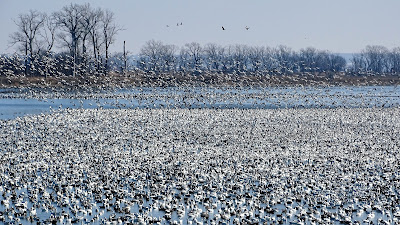 Every year they go through, and now they are stopping at DeSoto Bend Wildlife Refuge just east of Blair, Nebraska. That is a 45 minute drive for us.  As they make their way up the Missouri river to their nesting grounds above the arctic circle, it is a sight to see.  The snow geese have become so plentiful that there are now no limits as the U.S. Fish and Wildlife want to thin the numbers before Mother Nature does. As they migrate they stay just south of the snow line.  As it melts off in the northern states they are gone and it may be only a few days but not over a week that they will be here.

Mother Nature is not very kind when it comes to thinning the numbers.  Some day there may a disease as they are thinned out.  Hunting them in the fall at our blinds has not been very successful as they fly over in enormous flocks, flying very high, and going from refuge to refuge. 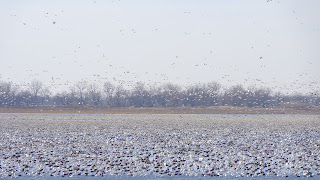 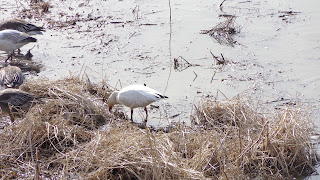 When stepping out of the vehicle at DeSoto, the first sound you hear is a high pitched yelping, that when multiplied by many thousands, will leave an indelible print on your memory.  When massed together they look like an enormous island of geese. Then all at once they begin to yelp, rise up off the water, swirl around and land back again.  We stood for an hour and watched this spectacle several times. 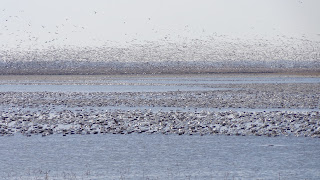 I truly believe snow geese are smarter than other waterfowl.  If there is one important lesson that snow geese have learned and learned well, it is that there is safety in numbers.  When my friends and I began hunting the birds during the mid 1960s, snow geese migrated across Iowa in small flocks that usually consisted of anywhere from a dozen on up to 20 or so birds.  The migration was well distributed statewide, and the geese stopped wherever there were suitable marshes. 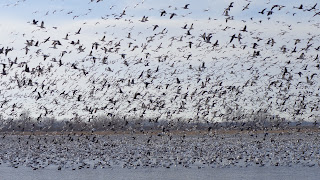 How times have changed.  Today, most of the snow geese are hunted in open fields with big spreads of decoys and with the use of electronic calls.  They do not decoy as in the past.  If you do get them to start coming in, a 20 yard shot is about all you can get.  I really believe the snow goose is the hardest bird to deceive and that includes the wild turkey.  I had a chance to hunt in western Nebraska with an outfitter that specializes in snows.  They put out over 1000 decoys in wheat stubble and hunt out of layout blinds. 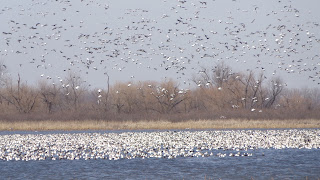 DeSoto is not only a stopping off place for snow geese, but for waterfowl of all types.  There was also a migration of Trumpeter Swans which we were able to photograph.  They stayed at a considerable distance.  In addition, there were bald eagles everywhere in the trees. 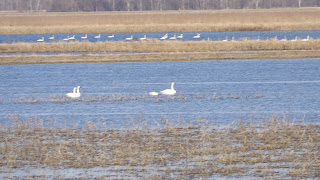 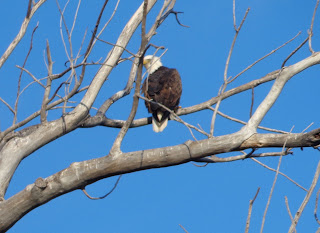 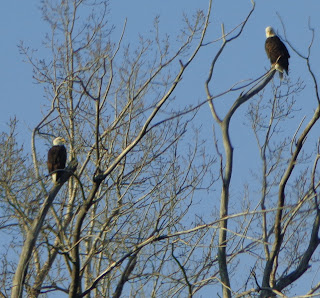 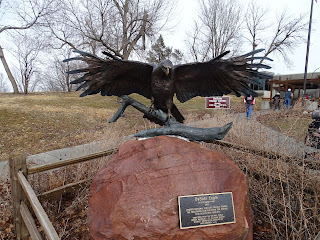 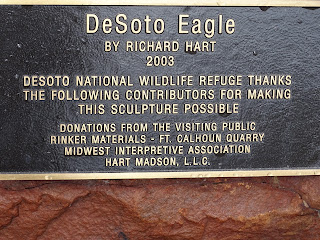 A decade or so ago, I had the privilege of hunting with Richard Hart.  It was great seeing the sculpture of the eagle he had made.

It is almost time to head to the fields and whack on a big tom turkey.

Cook and drain noodles, put in shallow baking dish. Add broccoli to the noodles. Make a sauce with the butter, flour and liquids. Add cheese, Worcestershire and pepper; stir until cheese is melted. Add turkey and salt to taste; pour over ingredients in dish. Arrange broccoli blossoms on top and sprinkle with almonds. Bake at 350°F for about 30 minutes.  This goes really good with Tusker Beer or a really good Piesporter wine from Germany.  Our recommended brand is Hirschbach & Sohne Piesporter Michelsbers Riesling Spatlese.  It has a big stag on the front of the label.  Your choice the beer or the wine.