If anyone tells you the Funky Chicken Turkey Decoy does not work, do not believe them.  This is the fourth time I have used this decoy and the toms literally hate it.  Once they lay their beady little eyes on it they want to come and beat the living daylights out of it.

My first day out was good as I saw birds.  This morning I did not see any at all and I did not hear any of them gobbling away.  I tested the air and gave out some “come up and see me, big boy,” calls, but got no response.  What I did see were a lot of deer crossing between the woods to the west of me and into the timber behind me.  I also got on site about an hour and a half earlier than yesterday.  That made no difference.

I placed myself on the opposite side of the valley where I had been yesterday.  I had seen turkey along the hillside and moving up to the northeast end of the valley and into the woods.  Also, I had experienced some really great luck on nice sized birds on the hillside.

I got to the farm around 7:30 a.m. and loaded up my gear which consisted of a gun, lawn chair, personal pack of TP ammo, calls, 22 cal. Ruger pistol, bug and tick spray, and extra strikers for the two calls.  The bug and tick spray is most important as there have been cases of West Nile Virus reported in the area.  At my age, I do not need that problem.

The alfalfa had grown up to just below the knees and this was cause for concern, as my experience has shown that grass too tall was avoided by the turkeys.  It makes for good cover, but they cannot use that magnificent vision to spot danger.  A big bird would not have any trouble, but one smaller might not make the climb up the hill to beat up on Funky Chicken. 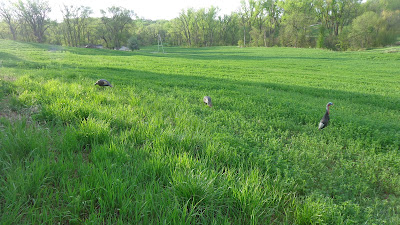 Putting out Funky and a couple of feeding decoys completed the spread.  This set up was based on the advice of the manufacturer.  It makes a lot of sense as the two feeders show the tom that there is no danger.  All he has to do is come up and kick sand in the face of Funky.

My hiding spot was behind a tree initially and practically at a 90 degree to the decoy.  After sitting there for a little bit, things did not look good.  I was well hidden to the right of me with scrub brush, but the left side was open.  A bird coming down the line of timber to my left could spot me very easily.  There was no distinct pattern of movement for the birds as in the past they would come from any direction.  I moved over to my left and had my left side totally obscured.  To the front was good coverage and to my right was satisfactory but not real great.

The morning could not have been more pleasant.  Comfortable, but not too warm or cool made this the time to be outdoors.  A high overcast kept the glaring sun away from making it too hot.  My Kindle was opened up and a book that was in the process of being read was underway as I waited for Mr. Tom to show up.  Periodically a couple of calls were made just to see if an answer could be made, but still, no one was at home.  Slowly my eyes got heavy, my head dropped, and I fell asleep.

Suddenly a loud noise broke the quiet as a jet going into Omaha Eppley Airfield flew over and ended a really nice peaceful snooze.  Forty-five minutes had gone by and it was now 09:45 a.m.

Down toward the bottom of the hill and in the alfalfa, a dark body was seen moving in a direction directly toward me.  Then a head stuck up and it was the white head of a mature tom.  With that magnificent eyesight, the Funky Chicken had been spotted.  He was at a perfect angle where he could not see me.  That was good, but what was bad is that I would have to shoot through the bush in front of me.  I wanted a picture of him, but he just might see the movement, and the only movement now was to get the gun into position to shoot.

Slowly, but very steadily, he came toward the decoy.  The gun was laying across the arms on the lawn chair, and slowly the gun was eased until it was pointing outward.  This was done with each step he took.  The gun was now eased into my shoulder.  I waited as he slowed his pace.  This was unusual as I had seen the toms get violent as they approached the decoy.  He was within range.  He continued onward toward the decoy as the gun was slowly lifted and the barrel gently eased through the bush.

Now I was looking straight down the barrel and the barrel covered his head.  The safe was clicked off and my finger slid slowly onto the trigger and rested on it.   Still he came with caution and was now well within range.  This was going to be a close shot.  I said to myself, “Do not pull or jerk on the trigger and  shoot over the top of him.” The gun was now getting heavy as the barrel was kept on his head to allow him to get closer. I took a  partial breath and held it.  My finger now gradually tightened on the trigger and then there was a loud explosion as the 3.5 inch shell found its mark.  The shot rolled him over backward and there was no doubt, this was a dead bird.

Putting the safe on the shotgun, I grabbed the Ruger 22 cal pistol and ran out to where this fine looking bird was laying.  A quick coup-de-grace to the head eliminated any chance of him coming back to life.  This allows the bird to bleed out so that you don’t have blood all over your outfit. Also,  I have had them get up and take off before, so it is an added insurance policy.  These are amazing birds and really tough customers.

After a successful hunt with Funky Chicken and friends, I took him home and got him dressed out by 11 a.m.  He weighed in at 18 pounds with a 12 inch beard.  My good friend John came to get the thighs and legs, and my wife and I kept the big breasts.

My wife and I cooked this recipe first to try it out before inviting friends.  Outstanding.

Salt and pepper to taste

1. Preheat oven to 400 degrees.  Bring a pot of water to boil with a generous pinch of salt.  Cook rigatoni per directions.  Drain and set aside reserving some of the cooking liquid for later.

3. In the same pan lower heat and cook the bacon in the remaining oil.  Add mushrooms to the bacon and saute for 5 to 10 minutes.  Add 2 cloves of chopped garlic and stir for a minute or so.  Add tomatoes with juice and parsley.

6. Transfer mixture to a baking dish and bake the mixture for 20 to 30 minutes at 400 or until the top turns gold and the cheese has melted.

7. Serve with a good Piesporter wine or Tusker Beer, if you can find it.

We are looking forward to having guests over to enjoy this recipe.