South Dakota is one of our favorite states.  For us they have it all from fishing, hunting to national parks and the beauty of the plains.  With some spare time we took off to do a quick tour through the state of some of the interesting sites.  On the top of the list was a tour of Delta 1, an ICBM base that was fully operation during the cold war, and we went underground to see how our service men and women lived during this tense period.

Out of Council Bluffs and a mere 2 hour and 45 minute drive straight north along I-29. Northeast of the city is a state park, the Palisades.  Palisades State Park is one of the most unique areas in South Dakota. Split Rock Creek, which flows through the park, is lined with Sioux quartzite formations varying from shelves several feet above the water to 50-foot vertical cliffs. Scenic overlooks and rushing water make Palisades a popular getaway. The park is popular among campers, photographers, sightseers, picnickers, rock climbers and hikers. 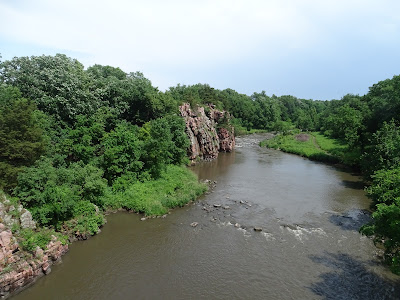 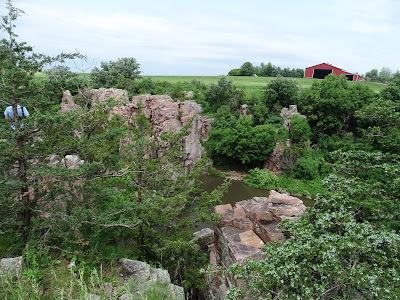 The facilities at the park are so typical of South Dakota.  They are just excellent whether you are a camper or wanting a cabin overlooking the stream.  We stayed a good two hours and were able to soak in all the sights enjoying the beautiful South Dakota weather.

Next stop was Mitchell.  Besides having a Cabela’s store, the town is famous for a tourist attraction, the corn palace.  The World’s Only Corn Palace is Mitchell’s premier tourist attraction. Some 500,000 tourists come from around the nation each year to see the uniquely designed corn murals. The city’s first Corn Palace was built as a way to prove to the world that South Dakota had a healthy agricultural climate.

Eight years before the turn of the 20th century, in 1892 (when Mitchell, South Dakota was a small, 12-year-old city of 3,000 inhabitants) the World’s Only Corn Palace was established on the city’s Main Street. During it’s over 100 years of existence, it has become known worldwide and now attracts more than a half a million visitors annually.

By 1905 the success of the Corn Palace had been assured and a new Palace was to be built, but this building soon became too small. In 1919, the decision to build a third Corn Palace was made. This one was to be permanent and more purposeful than its predecessors. The present building was completed in 1921, just in time for the Corn Palace Festivities.

The Palace is redecorated each year with naturally colored corn and other grains and native grasses to make it “the agricultural show-place of the world”.

Pushing west along I-90 our next stop was Wall Drug at Wall, SD.  This was a night stop over for us and so we had the time to tour the Drug Store.

Wall Drug has a rich history in the state of South Dakota. Nestled in the city of Wall in the western part of the state, Wall Drug has grown from its humble beginnings in 1931 to a thriving oasis. Wall Drug offers dining, activities, gifts and souvenirs, visitor information and, of course, free ice water.

Today, Wall Drug continues to offer the same amenities that made it a must-stop destination all            those years ago, and visitors still stop to stretch their legs, eat a delicious home-style meal and           drink some free, rejuvenating ice-cold water.

The city of Wall, South Dakota is home to 800 year-round residents and, thanks to Wall Drug, one       of the most popular attractions in the state, drawing in more than 2 million visitors each year.

Next morning it was off to visit the Badlands National Park in South Dakota.

The Lakota gave this land its name, “Mako Sica,” meaning “land bad.” Located in southwestern          South Dakota, Badlands National Park consists of 244,000 acres of sharply eroded buttes,                    pinnacles and spires blended with the largest protected mixed grass prairie in the United States. It        is desolation at its truest, where you can look for miles and see no sign of civilization. 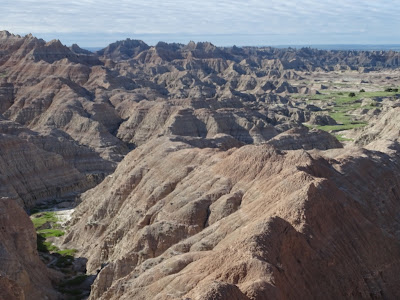 This land has been so ruthlessly ravaged by wind and water that it has become picturesque. The          Badlands are a wonderland of bizarre, colorful spires and pinnacles, massive buttes and deep              gorges. Erosion of the Badlands reveals sedimentary layers of different colors: purple and yellow       (shale), tan and gray (sand and gravel), red and orange (iron oxides) and white (volcanic ash).

Badlands National Park also preserves the world’s greatest fossil beds of animals from the                   Oligocene Epoch of the Age of Mammals. The skeletons of ancient camels, three-toed horses,             saber-toothed cats and giant rhinoceros-like creatures are among the many fossilized species found     here. All fossils, rocks, plants and animals are protected and must remain where you find them.           Prehistoric bones are still being uncovered today by park officials. 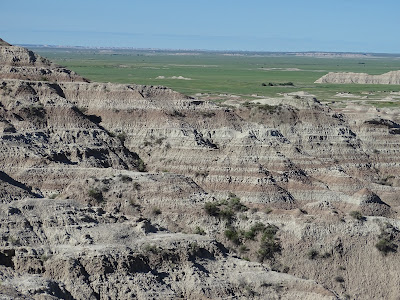 The Badlands are home to the largest mixed grass prairie in the National Park System and                   is surrounded by the Buffalo Gap National Grassland. Wildlife roams the park’s boundaries as             well. Bison, pronghorn, mule and whitetail deer, prairie dogs, coyotes, butterflies, turtles, snakes,       bluebirds, vultures, eagles and hawks are just some of the wildlife that can often be seen by                 visitors.  In 1994, the near-extinct Black-footed ferrets were reintroduced into the Badlands prairie.     These nocturnal animals are rarely seen by the visiting public.

This visit took care of day one and the morning of day two.  This afternoon we go to Delta 1 the Minuteman Missile underground for a tour of the facility and to Delta 9 to see an actual missile silo.  Inside was a dummy missile.  Next blog read about the experience with pictures of the underground and an exciting visit to another beautiful National Park.

Season game chops (to taste) using your favorite seasoning salt. Place flour, cornstarch, and touch of salt and pepper into large Ziploc bag (do not over season). Put game chops individually into the bag, shake to coat well. Once all chops are coated, remove from bag to a plate. Press coating into chops then let sit at room temperature for at least 10 minutes to help the flour stick to the venison. Meanwhile, preheat a large (16”) cast iron skillet (preferred) to med-high heat. Also, preheat oven to 350°. Melt butter in skillet. Add onion and sauté until almost transparent. Add package of sliced mushrooms (season with salt and pepper). Allow onions and mushrooms to sweat and caramelize. Just before onions and mushrooms are finished, add the minced garlic stirring to incorporate, about 2 minutes. Do not let the garlic burn, as it will taste bitter. Once onions, mushrooms, and garlic are done remove to a plate. With the skillet still at medium-high heat, melt 2 tablespoons of butter. Place game into melted butter and brown on each side. This will sear in the juices, not cook the venison completely through. Once browned, drain oil then return onions, mushrooms, and garlic mixture to the pan. Also add in entire can of beef or mushroom gravy. Make sure chops are mostly covered. Place the uncovered skillet* in the oven for 10 minutes to finish the dish. Remove from oven, garnish with freshly chopped green onions and serve. Great with mashed potatoes or a bed of butter and garlic pasta! *If your skillet is not oven safe, removed browned chops and place them, the mushrooms/onions/garlic, and gravy into a metal baking pan and follow remaining steps.