After the Badlands we headed over to visit the 3 parts of the Missile Site at Delta-1.  The three sites consist of the visitors center, Delta-1 where we would go underground and see the control room that two officers in the Air Force would be stationed 24 hours a day, and viewing the actual silo at Delta-9.

Our first stop was at the visitors center.  At this location an excellent history of the cold war was presented and the need for the missile defense that was built at the various locations across South Dakota and other plains states.  Since my wife grew up in Sidney, Nebr. she has first hand experience of living among the missile silos which were scattered across the farm lands of the area.  For me growing up in Council Bluffs, IA., Strategic Air Command (SAC) was just a few miles from our home.  Talk of nuclear war was always a subject of conversation as both of us drilled in school in an attempt to save ourselves should we be attacked.

If you visit the area it is important to spend some time at this center managed by the National Park Service. Exhibits and an excellent film about the time these missiles were part of the country’s Nuclear Triad.

Next we headed over to see the missile silo holding a dummy missile silo.  From 1963 until the early 1990s the missile silo at Delta-09 contained a fully operational Minuteman Missile with a 1.2 megaton nuclear warhead.  The Delta-09 millile silo was one of 150 spread across western South Dakota.  In total there were 1,000 Minuteman’s deployed from the 1960’s into the early 1990’s.  The site is open daily and there is a self-guided cell phone tour available year-round.  Visitors can use their cell phones to listen to a ranger recorded tour.

The launch facility consists of a silo 12 feet in diameter and 80 feet deep made of reinforced concrete with a steel-plate liner.  The door to the silo has been welded and fitted with a glass roof and an unarmed missile placed inside.  There are no tours inside the silo.

After spending time at the silo, it was time to head to Delta -1 to view the underground launch control facility. To visit Delta-01 you need a reservation through the National Park Service.  It is advisable to make this reservation several months in advance of when you think you will be there as the tickets are very scarce.  The reason for this is that only six people can fit into the elevator that will take you underground to stand in the capsule.  Also, in case of elevator failure, you must be able to climb a 30 foot ladder.  To make a reservation contact the park service at the following website. (https://www.blackhillsvacations.com/things-to-do/national-state-parks/supplier/698193-Minuteman-Missile-National-Historic-Site)

The launch control facility, known as Delta One (D-01), is about 10.5 miles (16.9 km) away, to the east-southeast in northwestern Jackson County.  It occupies approximately six acres (24,000 m2) about 1.7 miles (2.7 km) north of I-90 at Exit 127. It consists of an above-ground building containing a kitchen, sleeping quarters, offices and life-support equipment. Below this building is the actual launch control center, buried 31 feet (9.4 m) deep, connected to the building by an elevator. Guided tours are conducted underground here, but are limited to six people at a time due to the very small underground launch control center (“capsule”) and are a half-hour long. 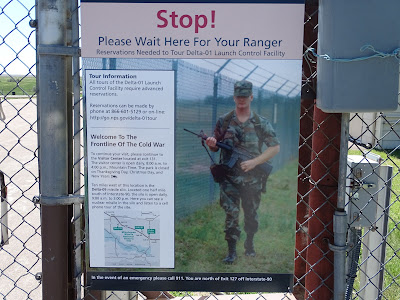 Two missileers worked and lived on 24 hour alert duty shifts within the LCC. There was an eight ton blast door that had to be opened from within before an oncoming Missile Combat Crew could enter the LCC. The two person crew would spend most of their time monitoring the status of their 10 missiles. Among their other work duties was authenticating message traffic, remotely monitoring maintenance at the silos and assisting with the dispatch of security police if any motion sensing alarms were tripped at the silos. When the missileers were not performing work duties they would pass time by reading, watching television or studying for master’s degrees through a special Air Force  educational program. There was also a bunk provided for one missileer to sleep while the other crewmember kept an eye on the weapons system. As one former missileer once said, missileer duty was “hours and hours of sheer boredom, punctuated by seconds of panic.”

Next morning our first stop was the Agate Fossil Beds. Agate Fossil Beds National Monument is nestled in the Niobrara River Valley in Nebraska 65 miles [110 km] east-southeast of its headwaters in the Hat Creek Breaks of Wyoming. The park preserves a unique unglaciated area of the High Plains. Wetlands stretch out from the river and meet terraces that lead to the breaks and buttes. The buttes contain important information about the life of mammals in the Miocene Epoch, some 20 million years ago.

During the Miocene the land now known as Agate was a grass savanna comparable to today’s Serengeti Plains in Africa. Twenty million years ago animals such as the Dinohyus (giant pig-like animal), Stenomylus (small gazelle-camel), and Menoceras (short rhinoceros) roamed the plains. There were also carnivorous beardogs wandering around, and the land beaver Paleocastor dug spiral burrows that remain as today’s trace fossils (Daemonelix) into the ancient riverbanks. There are remnants of the ancient grasses and hoofprints of prehistoric animals in Miocene sediments preserved in the park, as well as layers of fossilized bones.

The park was created to preserve the rich fossil deposits and their geological contexts amidst today’s natural ecosystem. Numerous mammals, fish, amphibians, reptiles, and birds inhabit or pass through the park, undisturbed and protected. Many species of native grasses and shrubs grow across the park’s landscape, as well as some undesirable non-native plants (e.g., Canada thistle) that the park does its best to control.

Next morning we were heading home and stopped of course at a landmark used by the wagon trains as they made their way across the prairie. Prior to exploration and settlement by European immigrants, the Native Americans of the area—mainly the Lakota Sioux—would refer to this formation by a term which meant “elk penis”. 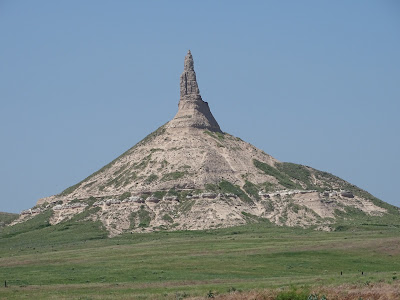 The name “Chimney Rock” probably originated from early fur traders. The first recorded mention of “Chimney Rock” was in 1827 by Joshua Pilcher. Pilcher had journeyed up the Platte River valley to the Salt Lake rendezvous of the Rocky Mountain fur trappers. The formation went through a variety of names before becoming Chimney Rock such as Chimley Rock and Chimney Tower, as well as euphemisms based on the original Native American name, such as Elk’s Peak and Elk Brick.

Since my wife is from the area, and we have seen the formation a number of times over the years, it appears to be slowly eroding and was probably much taller when the wagon trains came up the valley.

My wife’s home town is Sidney, Nebraska and we stopped there to visit Boot Hill. The City of Sidney was founded in 1867 by the Union Pacific and named for Sidney Dillon, a railroad attorney. The city grew up around the Sidney Barracks, a military outpost with a primary function of protecting the Union Pacific Railroad track layers against the threat of hostile Indians. The post was initially a block house on a bluff with soldiers residing in nearby tents. In 1869 the post was relocated to the present site and the following year it was renamed Fort Sidney.

During Sidney’s boomtown years, it was a colorful mixture of settlers, freighters, cowboys and soldiers and was also the center of the cattle industry.  The colorful mixture is lying in Boot Hill on the north side of town. 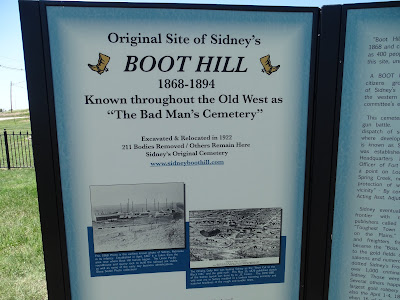