After Vietnam we moved on to our second country, Cambodia.  We flew into Siem Reap. This was an adventure at immigration and customs as there was a shortage of workers and an abundance of tourists.  It took over an hour to get through immigration to purchase our visas and then through customs was another thirty minutes.

We studied up on Cambodia as we knew little about the country other than during the Vietnam war incursions were made into the country.  Though few Cambodians are famous within the United States, one in particular is infamous: Pol Pot, leader of the Khmer Rouge and instigator of the notorious Killing Fields of Choeung Ed in Phnom Penh.

In ancient times Cambodia was the seat of the Khmer Empire which also ruled Vietnam, Laos and Thailand.  Like Vietnam, the French virtually took over Cambodia in the late 19th century and ruled by proxy until 1941 when they placed Prince Sihanouk on the throne. Tumultuous times took place after 1941 until the 1980s when the United Nations administered elections, reinstated the nation’s king in 1993.  Though the country has significant problems, including substantial poverty and an overwhelmingly corrupt political system, many hope the nation will overcome its recent past and turn its attention to a democratic future.

Our first day began with a visit to the 12th century temple of Ta Prohm, a mystical decaying Buddhist shrine.  One of the area’s most visited temples, Ta Prohm’s ruins have not been touched.  They stand exactly as they were when first discovered with massive tree roots strangling parts of the stone facades.

Then we went for a very interesting ride.  All over S.E.Asia rather than a taxi, you ride a Tuk Tuk.  This is a motor scooter pulling a single seat wagon for two people.  We have ridden in taxi cabs all over the world, and this is the most exciting ride we have ever had.  You want to kiss the ground when you arrive at your destination.

After lunch we prowled the city streets checked out the businesses and had a foot massage.  This was an outstanding experience.  I had forgotten one of my nightly medications but this was no problem.  We merely went to a Pharmacy and a very nice lady who spoke English, took care of me.  I told her want I needed and she sold it to me without a prescription.  What a wonderful country.

Later in the afternoon we went to Angkor Wat.  This is a UNESCO World Heritage site and one of the three great Buddhist sites of the eastern world.  Angkor Wat was rumored to be a lost city before its discovery by French explorer Henri Moughot in the mid-19th century.  It was a living city until 1431, when the Thais forced the Khmer court to move southeast.  Today the site contains magnificent temples and statuary from the Angkorian Empire which in its heyday rivaled those of Greece and Egypt. It took more than 500,000 artisans, workers, and slaves some 37 years to complete and comprises five towers each reaching more than 180 feet.

Serenaded by the sounds of the jungle, we entered Angkor Wat Temple, the world’s largest religious building.  It was really fascinating as we saw the intricate detail of the bas reliefs and artwork depicting mythological battles and scenes of everyday life.

As with all the temples, people were encouraged not to leave the group and wander off the trails due to the possibility of unexploded mines and ordinance.

We left Angkor Wat and headed back to the hotel.  Dinner was on our own.  Everyone was so tired we just ate at the hotel and folded our tents.  The tour was moving all the time and we needed some rest.

After traveling through the countryside we arrived in the afternoon for a visit to the tiny Banteay Srei temple.  It was built for the Hindu god Shiva in the 10th century and had exceptional carvings in its red sandstone walls.  Banteay Srei’s artistry on a miniature scale distinguishes it from other Angkorian temples, and has earned it the nickname “the jewel of Khmer art.”  Its name literally translates as either citadel of women or citadel of beauty. 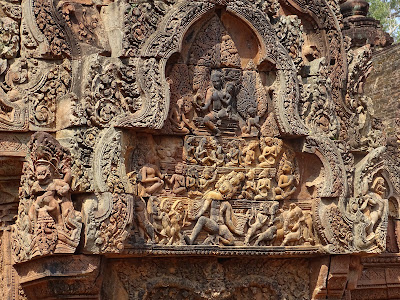 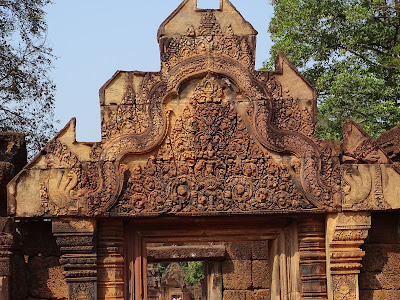 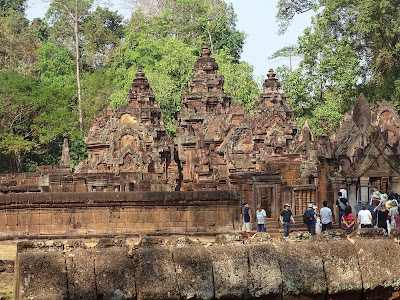 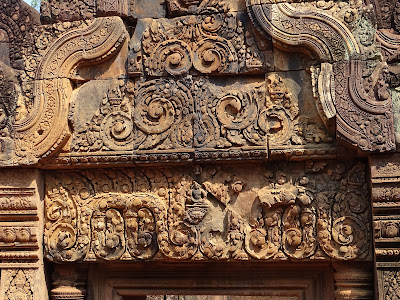 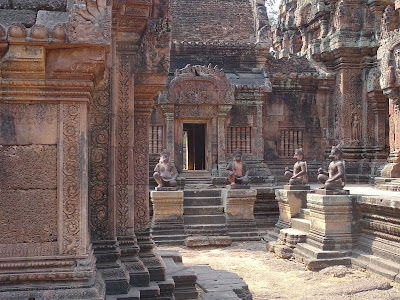 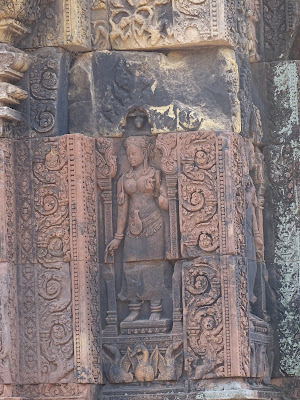 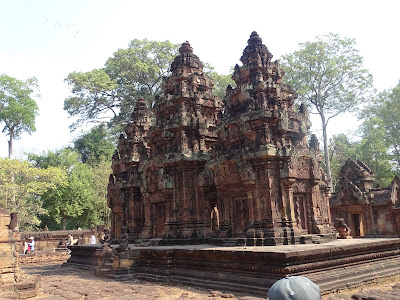 The smallest of the temples, this was our favorite because of the intricate carvings and relief presented all through the structure.

On the way back we stopped at a traditional Cambodian village and walked around freely.  Some of the ladies were selling some delicacies of sugar cane candy.  It was not only good, it was great and very sweet.  We will take this over chocolate any day.

The next morning late, we visited Les Artisans D Angkor, a development project where young adults are taught the traditional crafting methods of the region, including stone carving, woodworking, and lacquer application.  We also visited the home studio of Cambodian artist Lim Muy Theam set among lush tropical gardens containing a private collection of art and sculptures.

We transferred to the airport and arrived late into Luang Prabang Laos.

There were 5 souls on the motor scooter in the second photo.