We stepped off the boat on the Mekong River and entered Thailand.  More than any other Southeast Asian nation, Thailand, situated on the southern end of the Indochina peninsula, has written its own history.  This is largely because it is the only country in this region never to have been colonized by Europeans. It acted as a buffer state between British India and French Indochina.  Present-day Thai culture evolved from a melding of many disparate influences, most notably southward migration by people living in modern-day China, early Indian cultures and the massive, long-lasting Khmer Empire.  After having occupied present-day Thailand for much of the 9th through 13th centuries, the Khmers fell in 1431.  A smattering of states comprising Thais, Mongols, Chams, and other peoples thrived in the region.

Several dynasties occupied the country over several centuries and in 1767 the Chakri Dynasty was established in the newly formed city of Bangkok.  This dynasty continues to reign over Thailand through King Maha Vajiralongkorn, the only son of the world’s longest-serving head of state.  King Bhumibol Adulyadej became king in 1946 and ruled through his death in late 2016. The monarchy is revered throughout the nation, though the nation’s working government has changed hands several times in recent years.  Despite this conflicted governmental history, Thailand has experienced rapid economic growth over the past several decades and is now an economic power in the region.  It has the third highest quality of life in Southeast Asia and holds a rich combination of jungle landscapes, modern cities and fascinating historical landmarks.

Today the country is a constitutional monarchy much like England with a parliament and prime minister.

We crossed the border along the Mekong and off to our left upstream was Thailand.

We were met at the dock by transportation that took us to immigration and customs.  Now this became frightening.  We were met by our guide for Thailand, and our main guide also accompanied us on the total tour.  He is Vietnamese, and much to his and our surprise, he was not allowed to enter the country.  There was confusion at immigration about his identity and he and we were both concerned he would have to go back to Vietnam and straighten out identification problems.  This happened even though he had been in the country before many times. We waited patiently at immigration while all this took place and our Thai guide kept us posted.  After a three hour wait, the problem was cleared up and we were on our way.    People on the tour during this exercise were saying, “Without him, what are we going to do?”  We did have our Thai guide and could have at least gotten to our hotel.  This is the thrill of traveling in foreign lands.

Next morning we came face to face with one of Thailand’s most storied creatures, and one of the world’s most revered animals: the elephant.  Considered endangered in the wild, Thailand’s elephants face external threats from logging and poaching, as well as trainers intent on using the animals in circus-type shows. On our visit to the Chian Rai Elephant Sanctuary, we got to see these beautiful animals in their natural setting.  A 40 acre swath of bamboo groves, forest, grassland, and swamp, the sanctuary provides the elephants with room to roam as they wish.  We also had the opportunity to feed the elephants before enjoying a very fine Thai lunch at the Sanctuary.

The next morning after breakfast, we took a scenic drive along the narrow mountain roads to the Doi Tung Royal Vill and Gardens.  This is the former home of the late king Bhumibol Adulyadej’s mother, who led efforts against deforestation and also the heroin trade in northern Thailand.  Now part of a development project, Doi Tung hosts families from the surrounding hill tribe villages to stay and receive vocational, agricultural, and social training.  After the training program is over, the families return to their villages and put their new skills to work at local farms.

I want to make a side note about how we travel when on the opposite side of planet earth.  We are a long way from home and the hotels the tour company puts us in all serve a combination of western and Asian style breakfasts.  Breakfast is our big meal for the day, but we found that if we did that too much we would miss out on some excellent Asian cuisine at lunch and dinner.  So we altered our method of operation to enjoy all the local meals.  Per the recommendation of our guide, we were not to eat food from the street vendors.  He advised that he could, but we should not.

We toured the home and the grounds and enjoyed lunch together at a local restaurant.  Late in the afternoon we transferred to the airport for the hour-long flight to Bangkok. Now for a tip if you travel to Chiang Rai.   After 19 days of touring we were beginning to drag a little.  Have you ever been really tired, but kept on going?  That was Pam and I.  We were told to make sure we empty, and I repeat empty, everything out of our pockets at the airport.  I travel in cargo pants so I have a lot of pockets. Second, phones, kindles, and other electronic devices must be placed in a bin and x-rayed with your luggage. I set off the alarm not once, but every time before I got it right.  Fortunately, the people in line when I was sent to the back, motioned for me to get in, and go through the process again.  Finally success was achieved, and I passed through the security check.

We woke up when the plane landed in Bangkok.

Pictures are of the gardens at  Doi Tung Royal Vill. 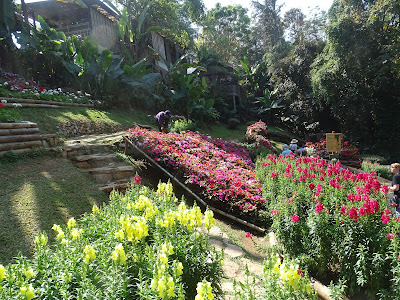 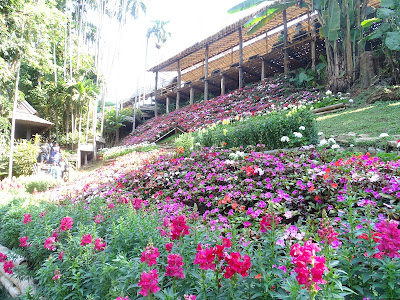 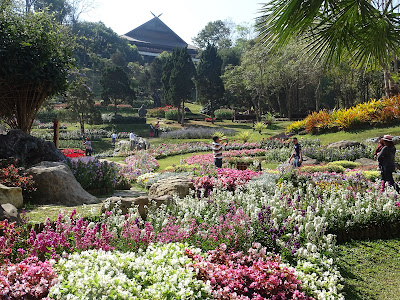 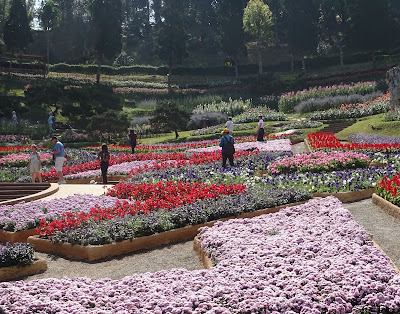 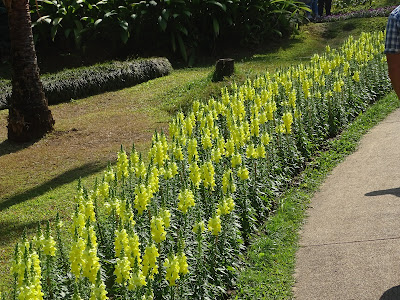 We took several hundred pictures of the flowers as this was an immense garden.  Other Asian countries we have traveled to  all share the love of beautiful flowers, flower gardens, and gardens in general.  Beautifully sculpted, it was inspiring to walk along the many paths and enjoy the solitude and beauty of the area.

The next morning we set out to explore sprawling Bangkok in all its colorful, tumultuous, and modern splendor.  Bangkok has 8.1 million people compared to New York which is about 8.5 million. It is forty times larger than Thailand’s next largest city and houses everything from multinational corporations to world-class health care centers. Bangkok is Thailand’s heart and soul, and has been described as “the most primate city on earth” (a description applied to cities that dominate their respective nations).  We began our touring of the Bangkok Flower Market, a riot of multi colored blooms located in Bangkok’s Old City.

The next pictures are a mix of the flower shops we saw sprinkled with small restaurants and street vendors.  If I ever go back, I am going to try the food from the street vendors.  I believe the guide just did not want anyone to take a chance and get sick. 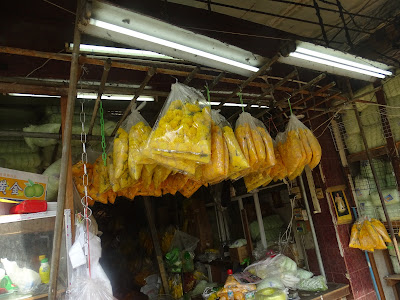 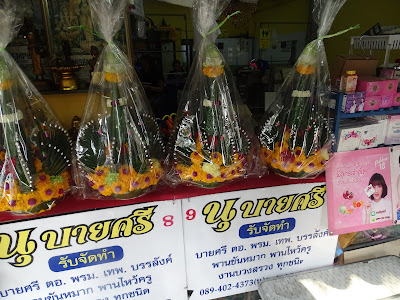 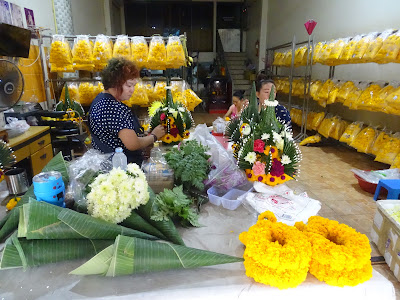 Back on the “tuk tuk” we rode to the Wat Pho Temple, home of the Reclining Buddha.  Covered in gold leaf, the icon measures some 49 feet tall by 151 feet long.

Wat Pho is also the home of Thailand’s largest collection of Buddha images, and the complex is also known for being the birthplace of traditional Thai massage.

Next, we visited the nearby Grand Palace, an immense complex of ornate buildings and gardens spreading along the bank of Thailand’s main river, the Chao Phraya.   The original palace was built in 1782 by King Buddha Yodfa Chulaloke, the first king of the Chakri Dynasty, after he moved the nation’s capital to Bangkok from Thonburi.

Subsequent kings have augmented the complex, creating the magnificent compound we saw on the tour.  Though it is no longer the residence of the monarch, the Grand Palace still hosts several official functions for the king throughout the year. It was here that we saw the elaborate Temple of the Emerald Buddha, with its venerated 31-inch high statue carved from a single piece of jade.  Pictures were not allowed.

The next morning we took a motor coach tour of the city and saw Bangkok completely and especially the fully developed downtown.

After lunch on our own we toured the biggest market I have ever been to.  There was everything and anything you would need to buy for daily living.  The following pictures show what we saw. 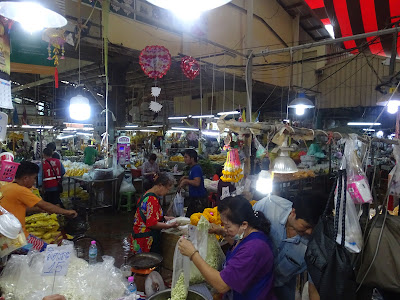 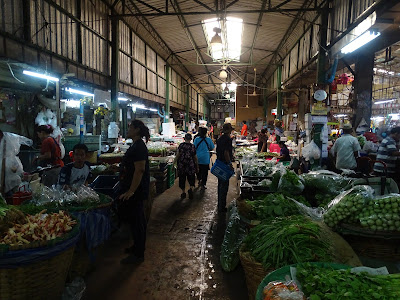 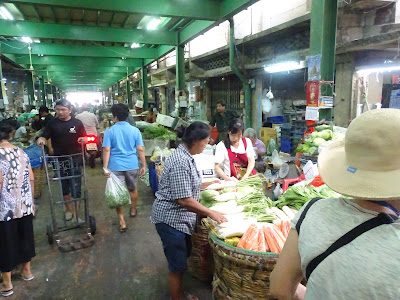 That evening we had our farewell dinner for everyone on the tour at an outstanding restaurant.  Again, the food was not hot, just slightly spicy.

“You are never too old to set another goal or to dream a new dream.” – C.S. Lewis

Click on my book and buy from Amazon for an entertaining read.