There he is Funky Chicken

This decoy has been in my stash of turkey decoys for going on four years.  When I first saw this funky looking decoy advertised in Bass Pro, I said, “No way.”  Then a friend used one and said it was dynamite.  It makes the toms really mad, and like the Charles Atlas advertisements of decades ago, the weakling got sand kicked into his face by the big bully.  The manufacturer advised adding a couple of feeder hens to give a feeling of security. 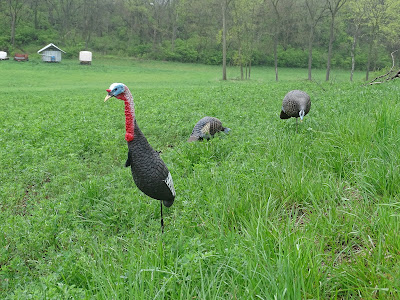 There is my spread.  The funky and two feeding hens.  It can’t get any better than this for Mr. Big Shot to come up the hill and pick a fight.  In other words, kick sand in the eyes of the wimp.

I set up my gear behind the large bush to the left of the top picture of funky.  I set my chair down, laid my gun across my lap, kept my camera at hand and grabbed a call. This was hunting.  After waiting for about thirty minutes, the woods behind me settled down.  The birds flew around and came alive along with the squirrels and other creatures scurrying around.   The one thing forgotten was Deet.  The TV news said the ticks were out and people enjoying the outdoors should be prepared.  I  definitely checked myself over when I got home.  Our area has been known for Lyme Disease.

The gobbling of toms was echoing through the valley on each side of me and an occasional hen made a little noise.  A couple of yelps were given on the call to let the big boys know a hen was in the area and was looking for love. Now, the truth is I have no idea if that really sends that type of signal, but without it, they don’t always come. Then I settled back and opened up a book.  Life cannot get much better than this.  Now to enjoy nature and wait for Mr. Tough Guy to come up the hill and pick a fight with the funky chicken.

The morning could not be more beautiful with some low hanging clouds and the sun peeking through the overcast.  To my left, I was well hidden and in the shadows.  Straight ahead was adequate as long as I didn’t move around a lot if a tom came in, but to my right, I was wide open.  Not good. This should have been taken care of before settling down to hunt. 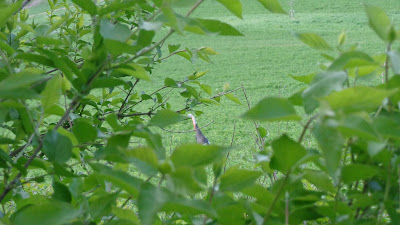 Looking straight ahead, you can see the funky and there is good vision to the front.  To my left it is totally obscured.  That is fine if anything comes from that direction. 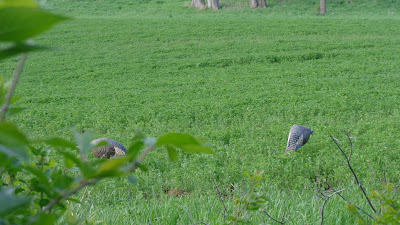 To my right are the two feeder hens and it is wide open.  Not pictured is a bush about seven feet from where I am sitting.  If something comes from that direction, being absolutely still will be the order of the day.

An old turkey hunter told me years ago that most big toms are shot between 8:30 a.m. and 1 p.m.  I was set up by 8 a.m. and the waiting was on.  The gobbling continued and as the time moved on, the noise slowly subsided.  At 9 a.m. another couple of yelps were given that echoed through the valley and then I picked up my book again.

Off to my right a couple of black looking dots were spotted moving directly toward me.  As they got closer it was obvious they were  turkeys.  Finally, they were identified as a decent size tom and a Jake. I reached very slowly for the camera and got a picture of the two.

The one on the left is the target.

They slowly approached, feeding and scratching the ground as they made their way up the hill.  The line of approach never varied from the time they were spotted. The range finder said they were initially out about 200 yards when they were first spotted. 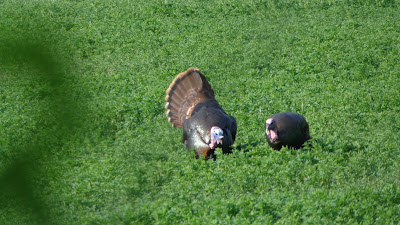 Not a giant tom, but he will eat well.

Moving slower than molasses in winter, the camera was slowly lowered onto my lap.  They were still out too far, so the wait was on as they continued to make their way toward the funky.  Each time they  dropped their heads down to peck at the ground, the gun was slowly moved upward toward a shooting position.  Things were getting heavy and now the lack of cover to my right was going to spoil the shot.

I could wait no longer, so at about 20 yards instead of moving slowly, I started to move rapidly.  Bad idea.  They were off running like a scalded dog.  The gun was never up to my shoulder, and I began to swear like a drunken sailor at screwing up this shot. (No Offense to the Navy). I reminded myself that patience was not one of my virtues, and this was a lesson I needed to learn again.  Notice, the word again was used as this is not the first time a shot has been screwed up.  The only good thing from this experience is that the 3.5 inch shells are expensive and none were wasted on a wild hurried shot.

Settling back down, the warm sunlight soothed my disappointment and I kept nodding off.  Twenty minutes went by as my book slid off my lap onto my boots.  I looked up.  There right in front of me came two more birds.  One was a decent size tom and the other a small Jake.  They were not 20 yards out and the gun was very very slowly moved to my shoulder.  The wait was on.  The tom was definitely going for funky chicken as he spread out his fan and became aggressive.  Right before he got to the decoy, his lights went out and he rolled backward.  As I was standing up, the Jake just stood there and did not take off until I came out from behind the bush.

Hats off to the Funky Chicken, He sucked one in again.

Once the toms have this decoy spotted, they always come in a straight line.  After using this decoy for the last four years, a tom was always shot on the first day and before noon.  If they are in the area, you will score.  Bass Pro is not selling them on line so you must go to a store to buy one.  I am sure there is one to be bought somewhere on line.

My book makes a great gift. Click on the book to buy from Amazon.