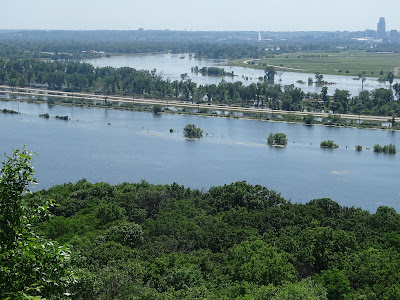 This picture taken from Lewis and Clark Monument north of Council Bluffs.  Downtown Omaha is at the upper right of the picture with the Missouri River weaving around Council Bluffs.  You can see I-29 with the water flooding the east side.

In 1953 the year of the big flood in the Omaha/Council Bluffs area was a highlight of a young boy’s experiences.  The west end of Council Bluffs was totally evacuated in case the levees did not hold.  Our group of rowdy little boys spent the week we were let out of school on a bluff that overlooked the city.  One of the boy’s fathers had been in the Navy during the WWII and we were supplied with an enormous pair of binoculars that took two of us to carry. We sat and watched the action going on along the river.  The levees held, thanks to all able bodied men who worked on them.

In the meantime the Eisenhower administration looked ahead and constructed a series of dams up the river for flood control and hydroelectric power.  Recreation was way down on the list, but apparently has moved up to the top.

In 2011 it happened again.  The local paper had an article that we were going to have a flood of “biblical proportions”.  “What does that mean?” was the question everyone I know asked?  A number of reasons for the flooding were published but thankfully the river around Council Bluffs did not breech the levees and work on them went on around the clock during the crisis.

Now it happened again. The Missouri River basin has experienced more than a year’s worth of runoff in the span of three months as reported by the Army Corps of Engineers.

The Missouri River endured 26.3 million acre-feet of runoff in March, April and May, This was reported by the reservoir regulation team for the Corps. It normally sees about 25 million acre-feet in an average year — making 2019 a record for runoff, he said.

That runoff can be attributed to the “tremendous amount” of precipitation seen in South Dakota, Nebraska and Kansas over a short period of time.  I fished Lake Francis Case part of the Missouri River system mid June and the river/reservoir was 15 feet over the bank and at Platte, South Dakota all but one of the boat ramps was available.  Limited parking and only one ramp to get in and off the lake was all that was available.  More on that experience mid month.

During the drive up, I listened to South Dakota radio stations, and it was reported that from June 2018 through June 2019 the state had experienced more moisture than ever recorded in the last 124 years.

Historic runoff has caused the Army Corps of Engineers to step up its releases from Gavins Point Dam, the flood control reservoir in Yankton, South Dakota. The release of water into the Missouri River is about 2.5 times the release in a normal year.

The interstate I-29 was closed from Glenwood, Iowa to the Missouri line, and from Council Bluffs to Missouri Valley, Iowa. 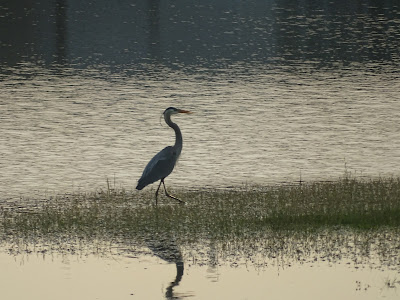 We live on a golf course and the lake is out of its banks and flooding part of the course.  Not good for the golfers, but it has brought a plethora of birds.  This Egret is one of the many fisher birds that come early in the morning for a meal. 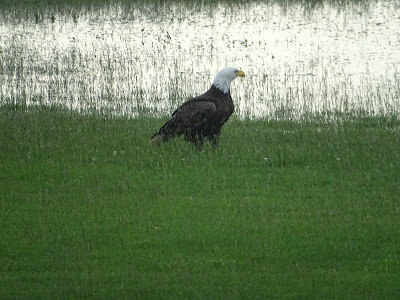 We have the pleasure of seeing two bald eagles that come every morning to fish.  It does not take them long to pick up a tasty morsel.  One morning an eagle snatched a fish and flew upon a neighbor’s roof and consumed his/her breakfast. 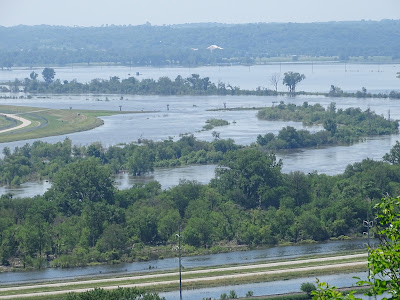 Looking from Lewis and Clark Monument to the west.  I-29 going north and south is at the bottom of the picture.  The Omaha Airport is at the left of the picture with a road around the airport in the picture.  Somewhere in the mass of water is the Missouri River that stretches all the way to the hills in eastern Nebraska. 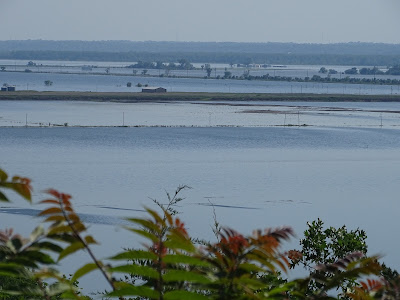 We drove up north of Council Bluffs to Crescent, Iowa and followed the road that ran along the bottom of the Loess Hills.  South of Missouri Valley is a housing area winding up into the bluffs and we captured the following pictures of the flooding. 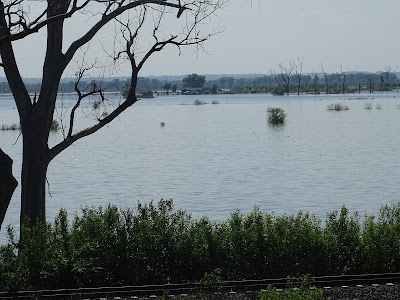 At the bottom of the hill the railroad track is visible along the flooded farm land.  The whole bottoms are flooded and there will be no planting of this ground this year. 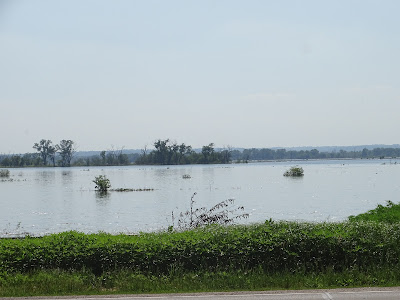 We would stop and grab a quick picture where there was an opening along the highway.

We drove south of Council Bluffs as far as permissible on I-29 and at the Glenwood turnoff we had to exit.  Following Highway 34 east toward the town we were looking for a highway or road that would take us up into the hill where we could look out over the valley.  Waubonsie State Park sits on top of the bluffs over looking the valley, but we could not get to it.  Also, we understand it was full of campers who had been forced out of their homes along the river bottom. 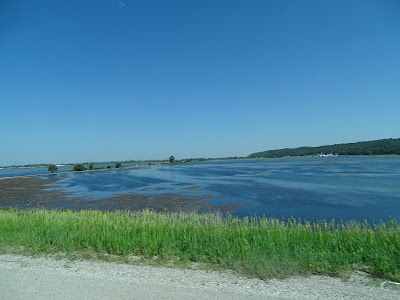 Along I-29 we were able to get a couple of pictures as we headed back home.  South on the I-29 was closed. 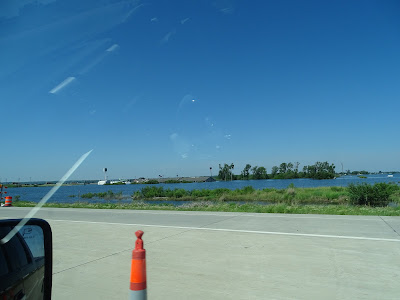 In the distance is a farm underwater.

My elk trip has been booked for the fall in Idaho in mid October.

Buy my book and read about the trips taken and how it was done.

Click on the book and go direct to Amazon.