Lake Francis Case is the large, gently winding reservoir behind Fort Randall Dam on the Missouri River in south-central South Dakota. The lake has an area of 102,000 acres and a maximum depth of 140 feet. Lake Francis Case covers just over 100 miles and has a shoreline of 540 miles.

A good friend and his wife had just come back from a two day fishing trip and gave an outstanding recommendation for a guide, using his boat and equipment, and a lodge to stay at.  The pictures they had were of some excellent walleye fishing.  The fish caught were not big lunkers, but really nice size  fish in the 15 to 18 inch class.  These fillet out really nice and fry up even better. 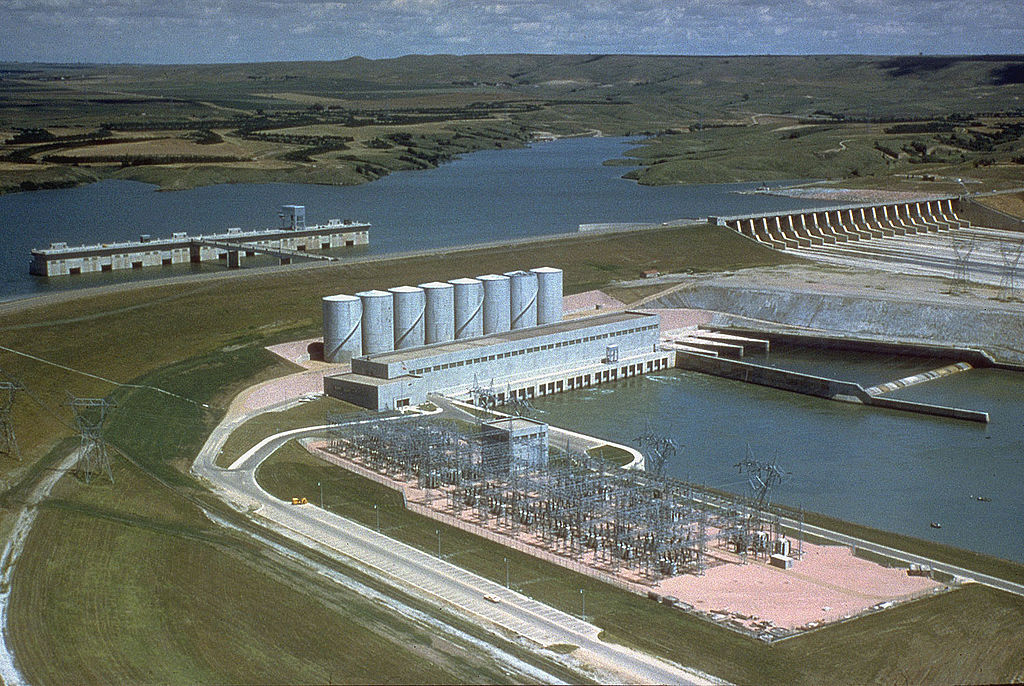 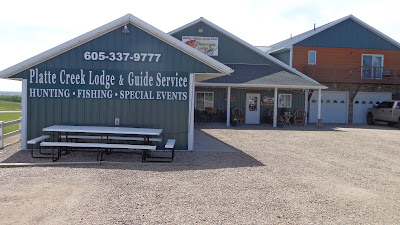 Comfortable room and lodge area made this a great place to stay.

Upon contacting the people at Platte Creek Lodge and Guide Service in Platte, SD, there was an opening for two days of fishing with a guide and a room.  I grabbed it.  Pam could not go along due to another commitment and was terribly disappointed as she really likes to hammer walleye.

Arriving late afternoon, I met my guide and we talked about the next morning.  We would depart for the lake at 7 a.m.  The water was extremely high and all the boat ramps were closed except one.  There was limited parking for this one and the guide was very pleased that I was a boat owner and could back the boat down and drive it out. 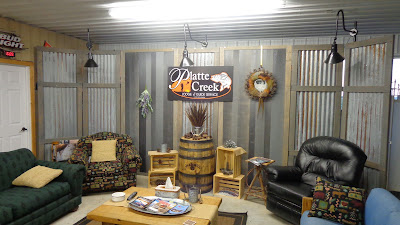 This is where I hung out and sat and watched TV in the checkered chair with the brown pillow.  Tables are to the right and another dining room in front of me for other people cooking their own meals.

The boat shown below was the boat we would be fishing in the next morning.  Wow, a brand new 19 foot+ Lund purchased in January.  This boat had it all.  Eighty pound thrust trolling motor on the bow that unfolded down into the water electrically and pulled itself back out when it was time to go.  The best part was it was controlled automatically by the Hummingbird graph at the drivers seat.  Set the depth and the motor kept the boat moving along at that depth.  This was hands free fishing.  Two 4 stroke engines were mounted on the rear.  One was a 200 hp Mercury and the other was a 15 hp Mercury.  Both were totally controlled at the drivers spot for steering and running the fuel.  This was way more boat than I own.

This boat would really move when it was opened up and the seats had a suspension system that kept the ride really smooth.

Next morning it was off to the lake.  When we got to the boat ramp area we were fourth in line for a single boat ramp.  Boats were piling up behind us and boats were floating just off the single dock waiting for the driver of the truck to come in from the parking to mount up and ride off into the morning light. The big boat came right off and I drove the trailer up to the parking area and hustled down to the dock. We were off, and oh how this boat would fly over the water with just the two of us in it and the 200 horses pushing us along!  (I keep talking about the boat, but it was exciting.  Plus, I don’t have to maintain it.) 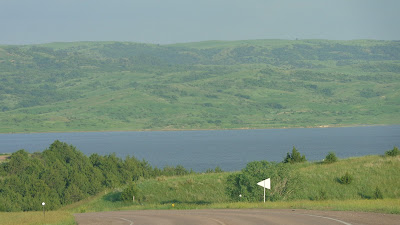 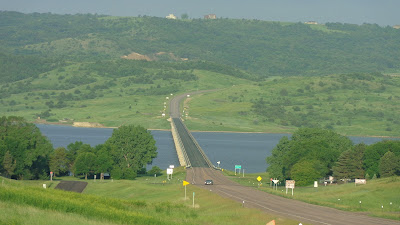 Highway 44 out of Platte, SD crosses over the lake.  To our left is a campground where we would launch the boat.  The area has 5 boat ramp areas, but all are underwater due to the precipitation and moisture South Dakota has had this spring. 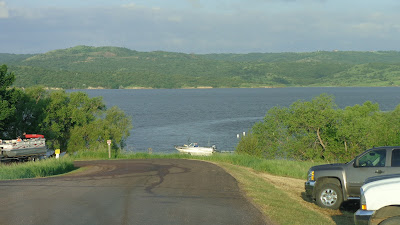 I shot a quick pic trying to get a shot of the traffic, but we were so hurried that this is the best I could do.  I have never seen so many people lining up to get onto the lake.  This is in the middle of the week and Father’s Day was the coming weekend.  Holy Cow, what will it be like then.

My guide said the lake was about 15 feet higher than normal and he has lived in the area all his life.  In the water we were off and flying over the water.  Moving to the east bank he set the depth at 10 feet for the motor and graph to keep us at that depth just following the shoreline. 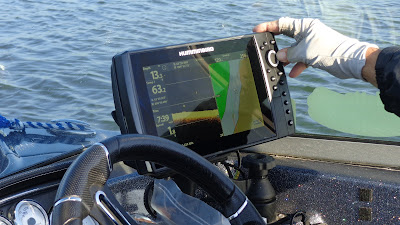 There is that Hummingbird telling the trolling motor where to go.  How sweet it is!

We started immediately picking up fish, not real rapidly but enough to pay attention.  Each of us fished with two rods in rod holders on each side of the boat.  This was a new experience for me, as I have always run the trolling motor, watched the graph, and operated one rod.  Wow, gentleman fishing is what was taking place.  At my age, I need all of this I can take.

The fish we picked up were below the 15 inch minimum.  But we picked up a lot and it was relatively constant.  This is a great sign for the lake, as all those small fish grow into big fish. A couple of decades ago a close friend and I fished Waubay Lake in the Glacial Lakes area and would pick up 50 to 100 fish a day all below the legal limit.  It was fun catching a lot of fish.  Next year we picked up a limit a piece in less than half a day.  This will happen here.  Good for the minimum.

Decades ago, my son and I fished with a native of the Iron Range in Minnesota.  We fished the B.W.C.A. and he said wherever you are catching small walleye, you need to move on as that is all there is in that spot.  Over the years I have found some truth in that statement.  We moved.

The next location we picked up a couple of keepers in the 16 inch range and when it went sterile, we moved again.  The guide just seemed to know where to go and where he had caught fish in the past and this year.  He told me we could have it all done by 1 pm, but it was not meant to be. 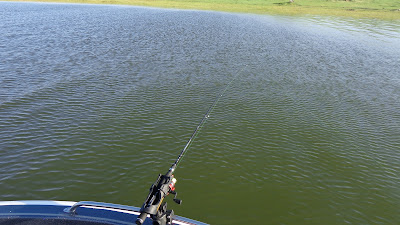 I fished the bow of the boat and the guide fished the back end.  I don’t think he was trying too hard because he was slow to set the hook and it seemed like sometime his line went slack.  He was more interested in keeping on a certain depth and monitored the graph and changing our depths at times.  Note the rod holder.  There was one on the other side of the bow. I am not used to this at all as I have always held a rod in my hand.  Time to teach an old dog new tricks. 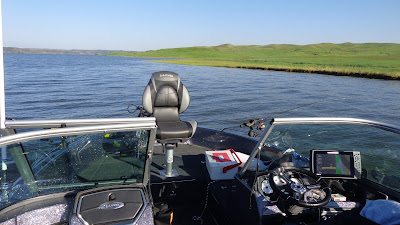 That is my spot at the front of the boat, unless we are rocketing across the lake to a new spot.  I got behind the windscreen and took off my hat so it did not blow away.  The white box on the floor has worms in the center and is surrounded on the outside by ice to keep them cold.

By 4 p.m. we had caught our limit for the day for the two of us. I was cooked as the sun had come out after 2 p.m. and the lake went somewhat flat.  Not good walleye water, but we kept at it until we had the limit.  I was ready head to the dock and get off the water. 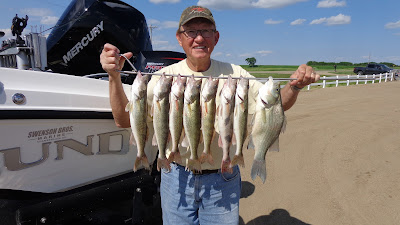 We did well and also picked up a white bass.  We will be back at it on the next day.

Click on the book and buy from Amazon.  I need to drink something other than Ripple.