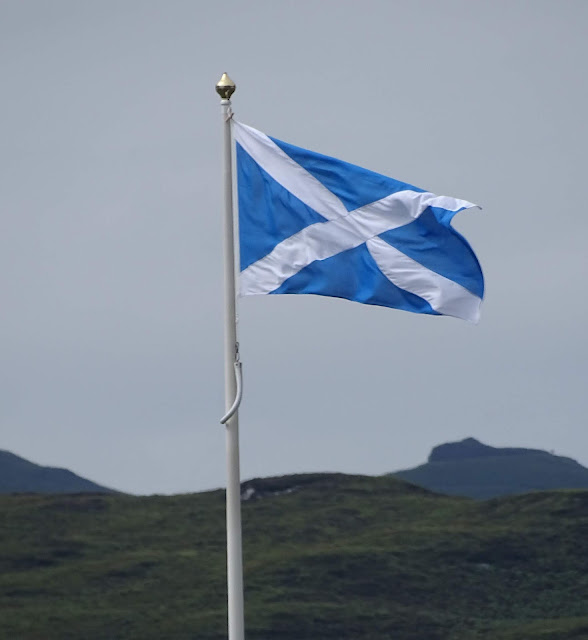 The flag of Scotland

We took the train from London Glasgow to join the next segment of this adventure.  Now for senior citizens,  like ourselves, this is a bit of an adventure in itself.  The cab ride to the train station was uneventful, but the drivers do not take American money and the credit card system in the cab was not working.  We just barely made the fare and left the driver a tip.  We had bought the tickets in advance and all we had was a sheet of paper with some number on it.  Entering the station there was a group of kiosks that seemed like the place where we should go.  It was.  Entering the numbers produced tickets just as we had ordered.

Next step was to figure out where to go.  Fortunately the station has people working there that must look for people like us who look totally lost.  It is the look of a deer in the headlights.  A very nice Englishman approached us and he had all kinds of identification exposed with a name tag and his role in the station and he got us headed in the right direction. That was a good sign and we were then re-assured we would not get robbed.

We then kind of got on the wrong train.  The one we had tickets for was non stop, but the one we got on had stops all along the way.  No problem, it just took a little longer and we saw more of the countryside. 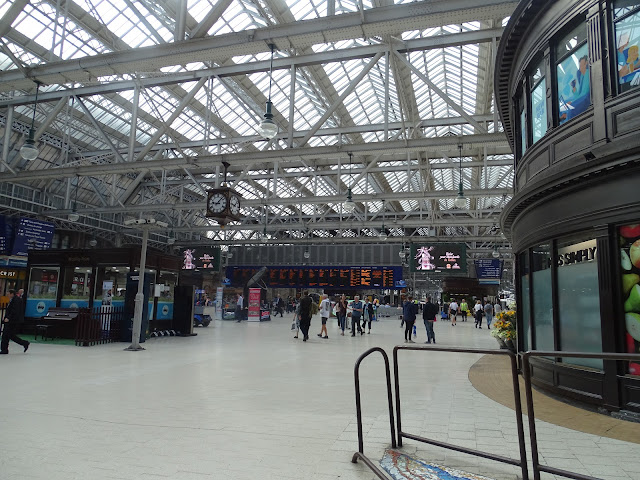 The hotel had a champagne bar.  After dinner we went up to the bar, drank some bubbly and watched people come and go.  At our age it is easy to be entertained. 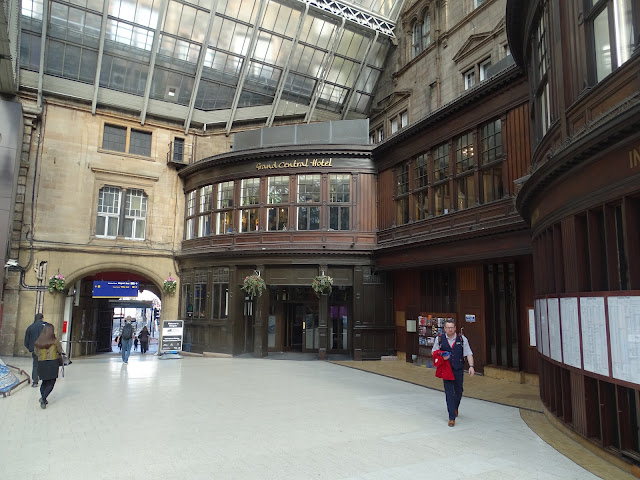 Just a short walk from the train is the hotel.

We judge a trip by whether it gets a “WOW” or if we had a great time in a great place.  Scotland and the Highlands got a double “WOW”.  The older hotels in Britain do not have air-conditioning and we sorely missed that in the Grand Central Hotel.  However, it was roomy and very comfortable.  Next morning we joined our tour group that had just arrived from America after their overnight flight from the states. They looked a little wilted, but fortunately for us we were ready to hit the bricks.

We were off and touring Glasgow. The origin of the name ‘Glasgow’ is disputed. It is common to derive the toponym from the older Cumbric glas cau or a Middle Gaelic cognate, which would have meant green basin or green valley. 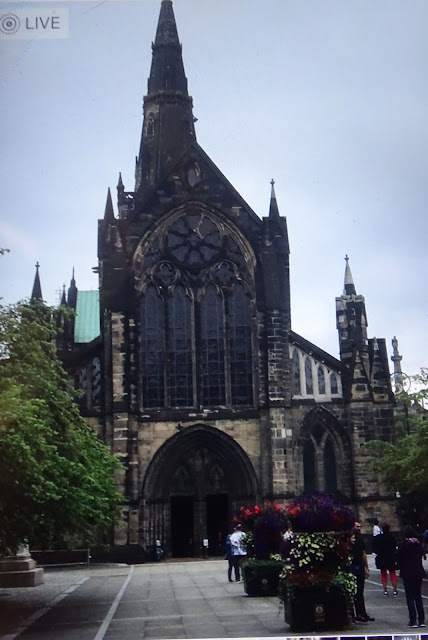 Our first stop was the Glasgow Cathedral.  Built in 883,  there is little known about the church buildings which stood on the site of the present Cathedral until the early part of the 12th century.

The first stone building was consecrated in about 1136 in the presence of King David I and his Court when John (1117-1147) was Bishop. 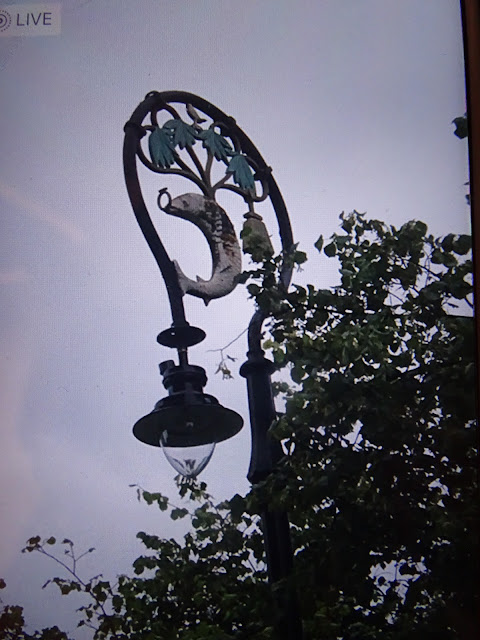 The fish with a ring in its mouth is a salmon and the ring was a present from Hydderch Hael, King of Cadzow, to his Queen Languoreth. The Queen gave the ring to a knight, and the King, suspecting an intrigue, took it from him while he slept during a hunting party and threw it into the River Clyde. On returning home, the King demanded the ring and threatened Languoreth with death if she could not produce it. The Queen appealed to the Knight who, of course, could not help and then confessed to St Mungo who sent one of his monks to fish in the river, instructing him to bring back the first fish caught. This was done and St Mungo extracted the ring from its mouth. The scene is represented on the counter seal of Bishop Wyschard, made about 1271.

The tour of the Cathedral was outstanding as two separate sections held mass and there were several levels below the main floor holding tombs of important people of Glasgow.

Another tidbit is, the Clyde River of Glasgow is renowned for its shipbuilding heritage, with some of the most famous ships in the world being built on the river’s banks. The Glenlee is a tall ship, launched onto the Clyde in 1896

Our next stop was the Kelvingrove  Art Gallery and Museum. 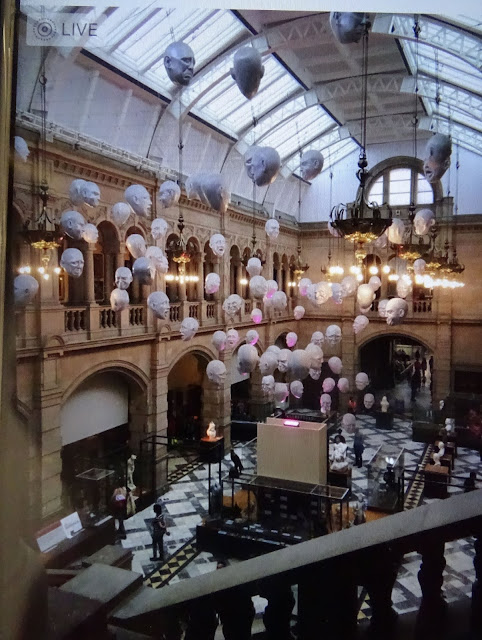 The galleries are full of objects and stunning works of art that explore importance of art in peoples’ lives across the world. Their is an organ recital on weekends and we were fortunate to hear the beautiful sounds that echoed through the gallery.  To see more of the gallery go to the following website: https://www.glasgowlife.org.uk/museums/venues/kelvingrove-art-gallery-and-museum

The highlight of the museum was Salvador Dali’s Christ of St. John of the Cross. Pictures were not allowed, but below is the link to view what we saw.  This is magnificent.

The next morning we were off for the Inverness region where we would spend the next three days.  First stop was a ride on Loch Lomond a freshwater Scottish loch which crosses the Highland Boundary Fault.  This is considered the boundary between the lowlands of Central Scotland and the Highlands. 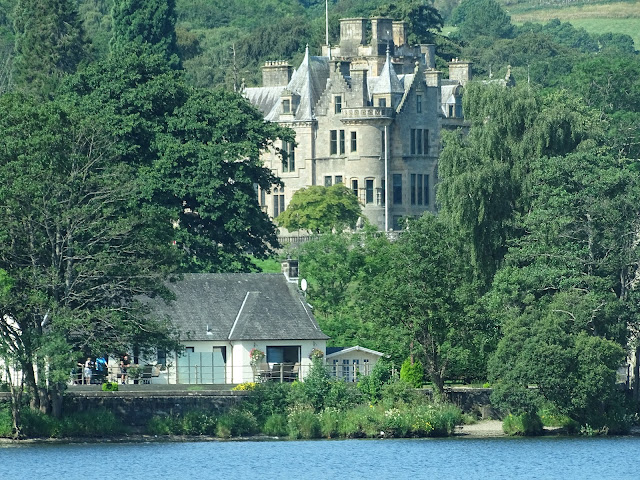 Castles, vacation homes are scattered along the banks of the lake in addition to resorts for the well to do of Britain. 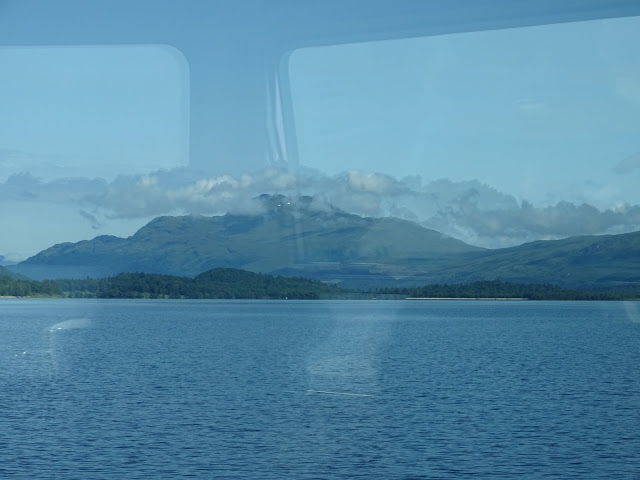 Loch Lomond is 22.6 miles long and up to 4.97 miles wide.  It is the largest lake in Great Britain by surface area.   It has a maximum depth of 502 feet.  The loch is surrounded by hills, including Ben Lomond on the eastern shore, which is 3,196 feet in height.

The afternoon we travel into the highlands on our way to Inverness our final destination.  We visit Urquhart Castle – an impressive ruin overlooking Loch Ness. 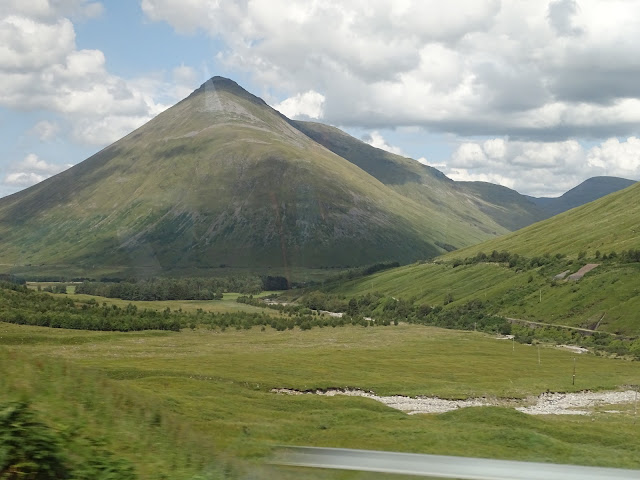 We are in the highlands. 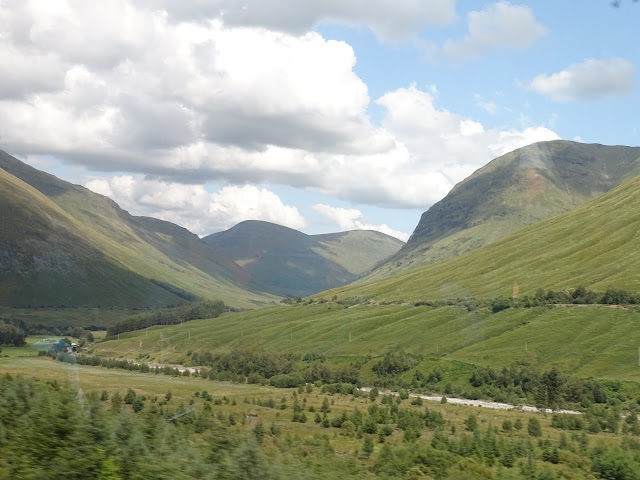 More of the Highlands 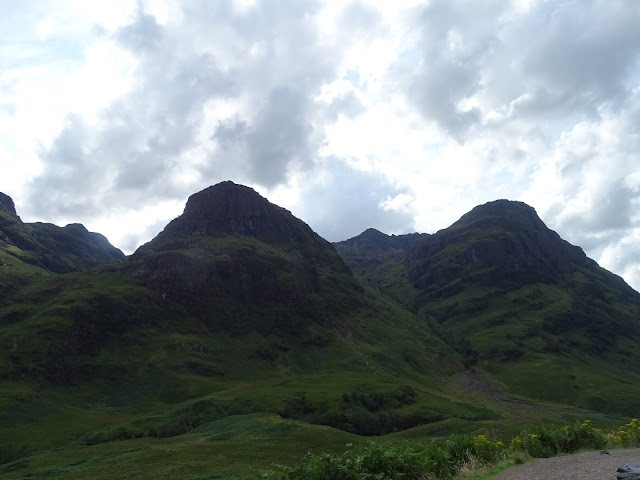 More of the Highlands.

Urquhart played a role in the Wars of Scottish Independence in the 14th century and was partially destroyed in 1692 to prevent its use by the Jacobites.  The present ruins date from the 13th century. The castle was held as a royal castle, and was raided on several occasions by the MacDonald Earls of Ross.  It was granted to the Clan Grant in 1509, though conflict with the MacDonalds continued.  It seems that the Scots were always fighting among themselves. 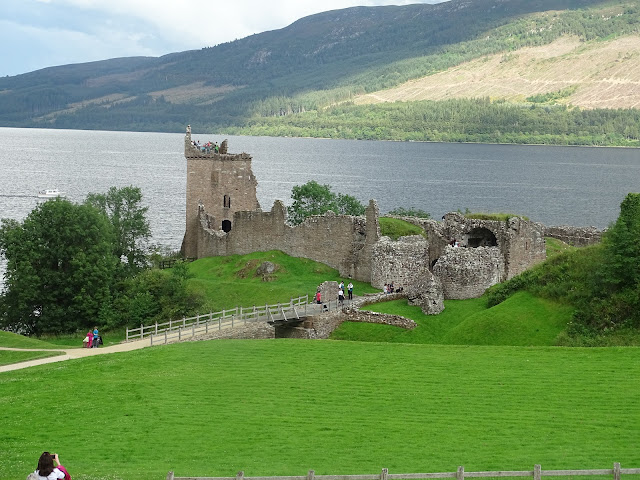 The castle complex is spread out overlooking Loch Ness. 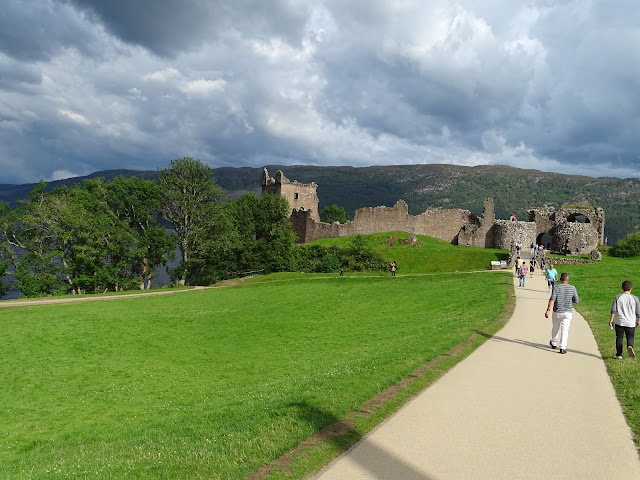 The castle over the centuries fell into decay.  In the 20th century it was place in state care as a scheduled monument and opened to the public.

We were near to the North Sea where Scotland has tremendous oil resources and off in the distance we could see oil rigs being floated to a location where they could be repaired and rejuvenated. 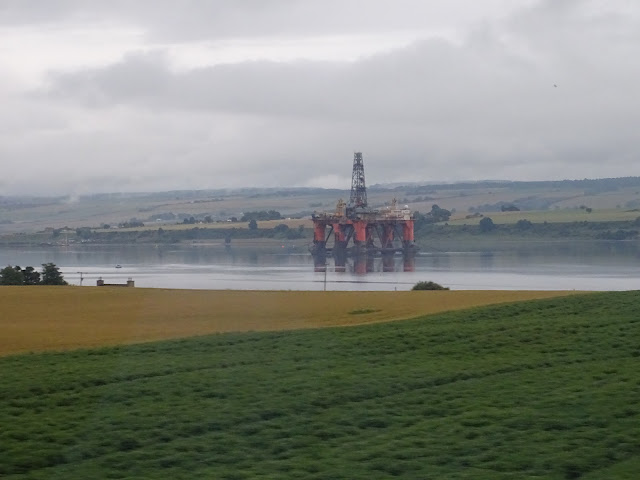 Oil rig from the North Sea.

We spent three nights at Inverness.  It is the administrative centrer for the Highland Council and is regarded as the capital of the Highlands.  The city lies near two important battle sites: the 11th century battle of Blar nam Feinne against Norway and the 18th century Battle of Culloden which took place on Culloden Moor. A settlement was established by the 6th century with the first royal charter being granted by Dabid macMail Choluim (King David I) in the 12th century.  The Gaelic King Mac Bethad Mac Findlach (MacBeth), whose 11th century killing of King Duncan was immortalized in Shakespeare’s largely fictionalized play Macbeth, held a castle within the city where he ruled.

In the morning we headed to Dunrobin Castle, a stately home in Sutherland in the Highland area and the family seat of the Earl of Sutherland and the Clan Sutherland.  Dunrobin’s origins lie in the Middle Ages, but most of the present building and gardens were added by Sir Charles Barry between 1835 and 1850.

The lands of Sutherland were acquired before 1211, by Hugh, Lord of Duffus, the grandson of the Flemish nobleman Freskin.  As we looked over the history, there was nothing about how the lands were acquired.  Since it was not discussed, I can only assume some poor working slob had his land taken from him and his family and was murdered.  What can I say, it was 1211.

The lengthy history is very interesting of how things were granted and to whom. 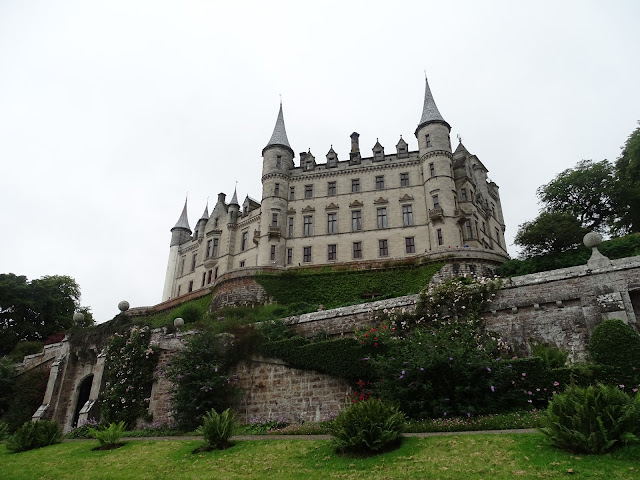 It was good to be rich in those days. 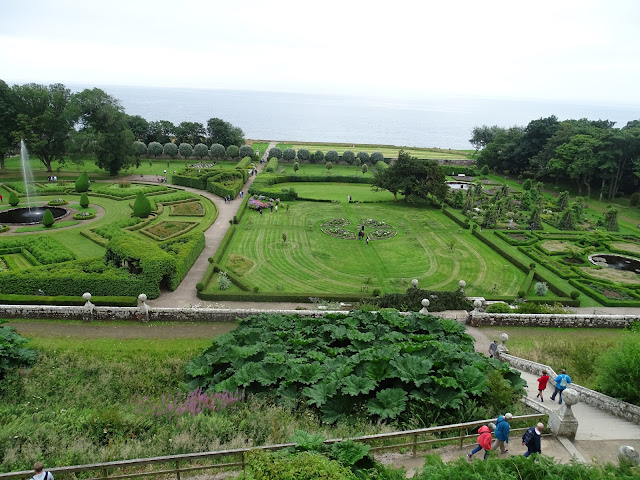 The castle gardens were outstanding.

The castle held a cafeteria and after a hurried lunch we wanted to see the rest of the interior.  We went through almost all of the rooms and countless pictures were taken.  Pam said, “Your readers do not want to see the living quarters.  They want to see the war room.” 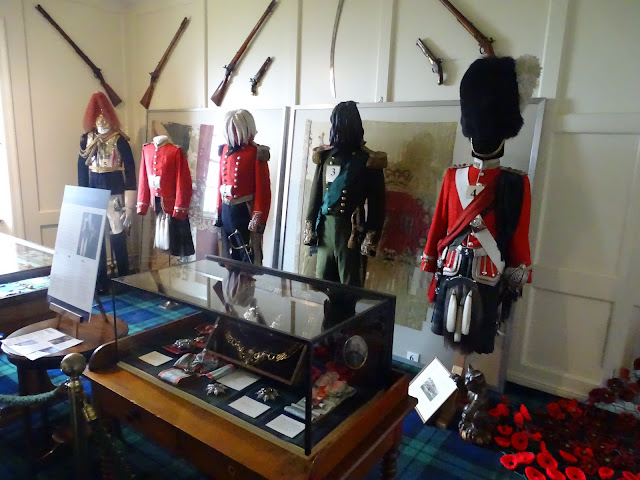 I did not notice a lot of weapons of war, but there were a lot of uniforms for parades.  I think someone else did the fighting, and these people pranced around and took the credit.

The castle and the surrounding areas were fantastic, and the best part was we could take pictures of the interior.  Elegantly furnished, it was good to be the Earl.  The best part of this visit took place well after lunch.  We had the pleasure of watching the resident falconer demonstrate the different hunting methods used by owls, hawks, and falcons in a series of fascinating aerobatic displays on the castle gardens. 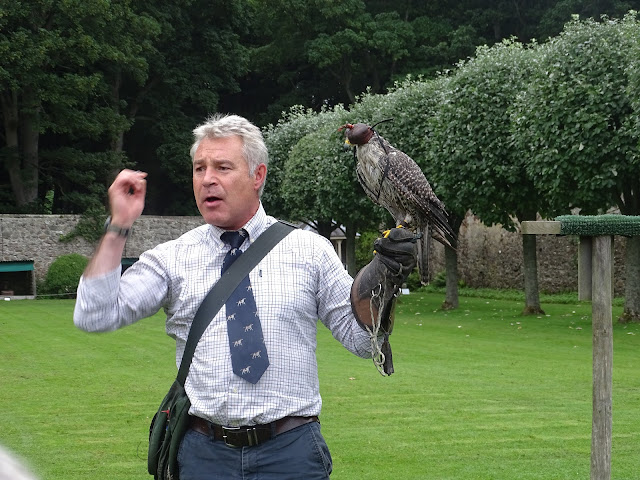 Besides seeing a demonstration of the falcon, we had an outstanding talk about the bird and birds of prey used for hunting.  He released the falcon, and the bird would not come back.  The show must go on so a hawk was brought out and a demonstration was provided by this bird. 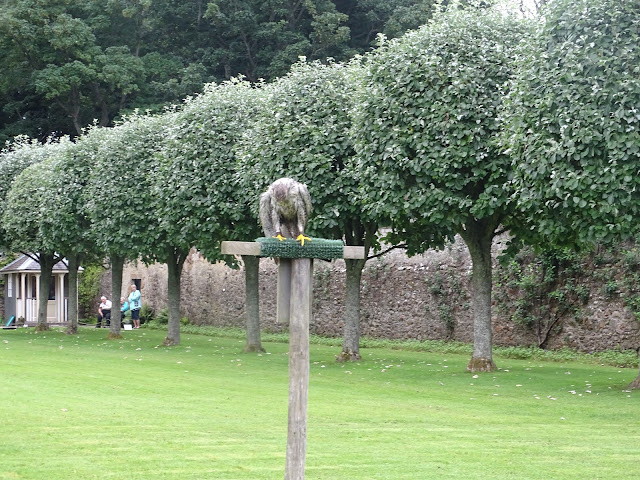 The Peregrine Falcon before he said, “I am through entertaining this bunch of Yankees.” 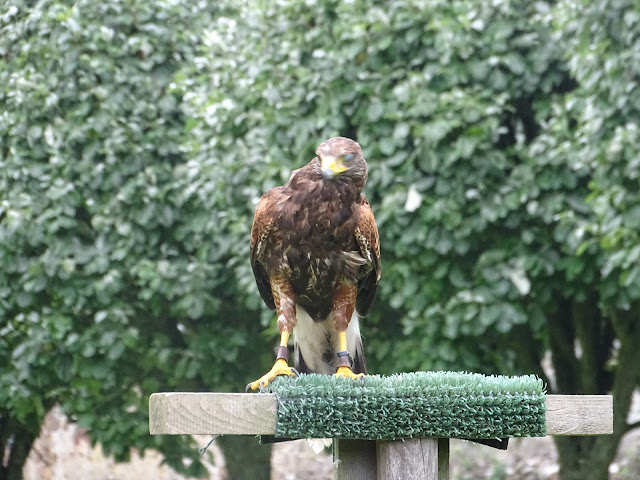 Look at the face on that hawk.  He means business and he provided us a great demonstration of his hunting and killing ability.

Listed below is a video, provided by a friend, that is an excellent demonstration of the Peregrine Falcon. You will enjoy this demonstration.

Sightseeing on the way back to our hotel was total enjoyment as we viewed the beautiful countryside of the Highlands.

Teal Season will open on September 7th in Nebraska and the new duck hole owned by a longtime friend is ready to go.  Plus, I leave for Idaho on another Elk Hunt the second week of October.  Somehow, I will try to get a fishing trip in on Lake Elwood south of Lexington, Nebraska.  The fall in the Midwest is a great time of the year.