This was what I was after, but not that big.  Notice the cape and the low slung belly.  I did one of those years ago and my wife still reminds me that he was not the best eating.  This animal was almost 600 yards when I got the picture.

Many biologists believe the name “wapiti” (WAA-pi-tea) is a Shawnee Indian word meaning “white rump,” an appropriate description for the elk’s large rump patch.  This is the animal I set out to hunt in eastern Idaho southwest of Yellowstone in Montana on October 8th.  The reservation was made in mid January and at that time, it was hoped the weather would be tolerable.  Two years ago a hunt was planned with outstanding results, and last year we hunted moose, and the weather could have not been better.

This year the warnings went out for Montana, the Dakotas, and Wyoming for severe cold, high winds and lots of snow.  Driving across Wyoming warning signs on I-80 gave a really bad picture of what was to come.  The plan was to stop overnight in Rock Springs and then drive up to Jackson, Wyoming next morning, and head over Teton Mountain Pass.  Now for a flat lander this is an adventure in itself.  I always put the truck in a low gear, engage the four wheel drive for more traction, and engage a trailer tow device as if the truck is pulling a trailer.  The object here is to use engine braking going down the pass.  Whenever there is a place to pull over, it is done, and the natives go around me waving with one hand and a finger.  It must be some sort of mountain greeting.

Anyway, I did not go that way the next morning because based on the weather forecast, there was a lot of snow along that route.  Instead I went west to Ogden, Utah, and then northerly to Saint Anthony, Idaho along I-15.  From there it is only a 15 minute drive to the ranch and only adds about 1.5 hours to the trip. 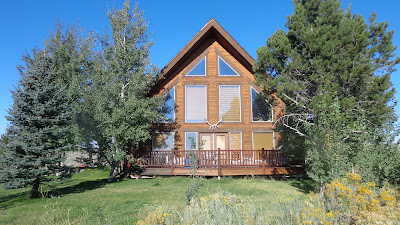 Here is home for several days.  Juniper Mountain Ranch and they take really good care of you.

I arrived at the ranch by 3 p.m. We should have gone out and sighted in our rifles, but the wind was so strong and the temperature was falling,  so this was put off until in the morning.  This is gentleman hunting in a warm comfortable lodge, private room and bath, and three meals a day in a dining room with a fireplace and comfortable seating.  At my age, and I am old, riding old paint into the mountains and bedding down in a four walled tent has long since been over.  We ride the iron horse in search of a good looking elk to stalk. 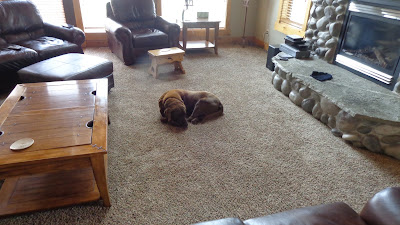 The camp dog.  I never learned his name, but he greeted everyone when they came in the lodge.  His job was to sleep and greet people.  I shared a lot of the same symptoms he had for an old dog.  He is 13.

That evening over dinner, I was teamed up with the same guide of two years ago and it was a pleasure to see him and have the opportunity to hunt with him again.  All the same people were there when my wife had gone with me two years ago.  She did not make this trip.  The staff remembered her well and was disappointed she had not come along.  When you see the same people that you saw two years ago, that tells you about the quality of the lodge and the business they are in. 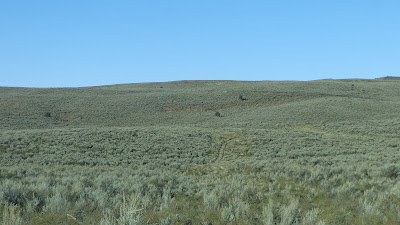 After leaving the ranch house and heading out into the ranch land, it is covered with sagebrush.  The plants are almost up to your waist and if you cripple an animal and he lies down, it will be tough to find him.  We would move from high point to high point and look around, then move into low areas and look up and around.

The ranch covers a lot of territory and provides an excellent opportunity for a good animal.  It was extremely cold and the wind was really blowing so that made it quite miserable.  The good part was we were in a four wheeled drive truck and began searching for an elk, stopping to glass and see if we could get into a good position.  With the wind, there was no need to worry about direction as it was pouring out of the north. We would just have to get down wind from our target and move toward him. 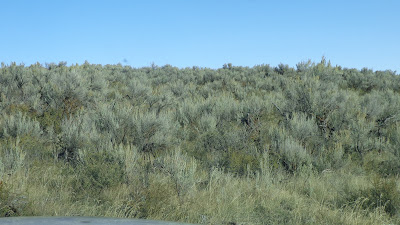 Another view. This is tough country.

We saw a number of good looking animals, but were unable to get into a position where a shot could be taken.  At least there was no snow as the weather had remained north of us into Montana driving southeast into Wyoming and the Dakotas.

We spotted this boy watching us from a long distance.  Thanks to telephoto lens, we got his picture.  He did not linger long and the wind was right behind us blowing into his face.  He split.

Next morning out we went again and the weather was still extremely cold, but the wind had gone down.  Clear blue skies and visibility were excellent.  We moved from high points to scan the scenery for horns sticking up above the sage brush or an elk showing his white rump on his backside. 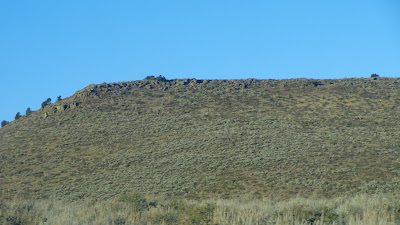 We moved up to higher ground to get a better look around.

We drove up higher where we could get a better view of the total landscape.  With binoculars and spotting scope, we scanned the area looking for some meat for the larder. Then we spotted some elk moving slowly grazing at a distance of about a half a mile. 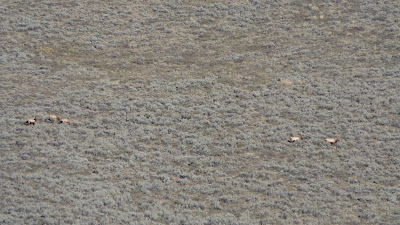 The two to the right of the picture were the ones we were after.  My guide said he knew of a low lying area where, what he called, September grass was growing. He believed they were heading toward that area.  So we also headed there.

We kept track of the movement and moved as quickly as possible across the dense growth of sagebrush.  It was obvious where they were heading and getting there ahead of them was necessary.  The truck was back behind a rise and we moved into a vantage point where we were looking into the small valley.  We waited.  The wind was right in our face and they would not be able to wind us as they headed into the green grass.

At 250 yards, I put the 300 win mag in the shooting sticks, adjusted for the distance and put the cross hairs in the sweet spot for the one I wanted.   Kaboom! It was all over and we hustled down to where he dropped. 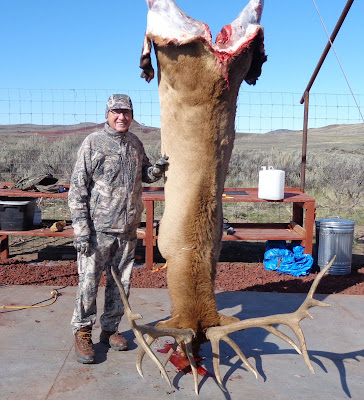 He dressed at 380 pounds of fine eating.

I use Matt’s Meats in St Anthony for the processing.  I used them before when we  hunted the area two years ago.  They will process the burger into half pound packages.  We give a lot of meat to friends and they like the half pound packages.  You can have sticks and salami made, but it will take an extra day.  Staying at local motels is not a problem and there is plenty of scenery to explore.   Yellowstone is close if you want to face the crowds.  I do European Mounts with my game, and Fall Taxidermy in St. Anthony will turn it around in two days.  He did an excellent job.  All in all, I had a great hunting experience with a guide I enjoy and a lodge with outstanding cooking.  Plus, I left with a load of meat and a finished European Mount. 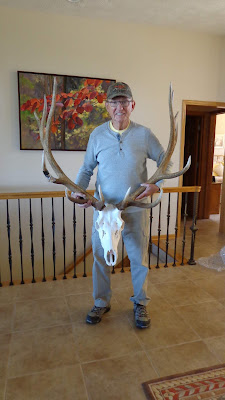 Fall Taxidermy did a really good job and I was very satisfied.

Click on the book and buy from Amazon.  It tells you where I have gone and how I did it.