This is a mount at my host’s home.  Magnificent describes this mount as you enter the lower level and look up the stairs.  The picture does not capture the size and they are really big, smart, and nature’s ultimate hunter.

Last December, I hunted in the province of Alberta, known for its population of Grey Wolves.  The opportunity was muffed and I slept like a baby afterward.  I cried all night.  I hunted with the outfitter where I had harvested a nice moose.  I was issued a wolf/coyote license with my Alberta tab for the moose, and was told the area held an abundance of wolves.  The claim was their favorite morsel was moose and elk calves and the population loses 80% of the newborn moose to the wolves.  My wife was with me on that trip and we did see some at great distances early in the morning or evening.  No shots were taken. 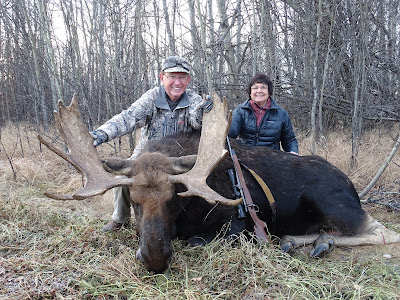 My wife and I with our moose in 2018 and our friends enjoyed dining on this fine looking boy.

More research was needed to check other provinces across Canada. It appeared that the majority of the outfitters hunted them from fixed position over bait.  Over bait means that you are within 100-200 yards of the bait pile.  I also learned that at the first location, that warmer temperatures were better for drawing a wolf to the bait.  Severe cold makes the meat totally frozen and when they are out hunting at night a nice tasty moose or elk calf makes an easier meal.  I also learned they will come to a call depending on the time of the year.  I was told early in the season was best when they had not been hunted too much.

Finally, I found an outfitter in Ontario that hunted totally different than using a fixed position.  Bait sites were established and the sites were checked in the morning.  If there were fresh wolf tracks, a tracker with snow shoes followed the tracks to a where they had bedded down and pushed them out of their bed.  The tracker never saw the wolf, but followed the tracks, and radioed the direction they were going.  A hunter would be posted in a clearing or general clear area and set up to harvest the wolf when they appeared.  Sounds simple, eh! Forsooth, forsooth, not so.  The wolves will change direction, circle behind the tracker, go through some underbrush so thick you can hardly see through it, but not necessarily pop into view where a hunter has posted himself and be within range. Shots will be at 50 to 400+ yards.  More to come on that.

My drive out of Council Bluffs took me up through the twin cities through Duluth and then into Ontario.  It was not cool, but really cold and very snowy.  I arrived after a two day drive at the outfitter’s home and we got acquainted.  Next morning we went out and baited sites and checked sites that had been previously baited.  After lunch we checked a bait site and it was covered in wolf tracks.  I was posted in a location, given a radio, and the outfitter took off. 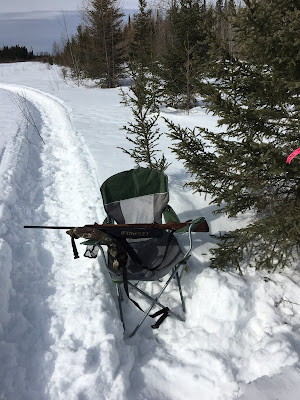 My first hunting site, 100 yards from the bait.  The chair is totally useless.  The outfitter dropped me off at this location with a snow mobile.  When I stepped off the machine I went into snow up to my crotch.  When sitting down in the chair, it almost fell over backward as it sunk into the snow.

Okay, now you have an idea, somewhat, of the conditions a hunter has to deal with and whose side the odds are on when it comes to harvesting a wolf.  I was told to stomp down a hole in the snow, then press down with my hands to make a bench in the snow.  When sitting on the snow bench you have to practice shooting positions on either side to be ready when and if an animal appears.  I immediately recognized that this would not be easy.  Among the lessons learned in Alberta, being absolutely still is most important.  The wolf is a sight feeder/hunter and it will pick up on the slightest movement.  Also, during the day, they do not like to leave the safety of standing timber and brush. At this location, there were no hits, no runs, and the only errors were made by me flailing around in the snow.

That evening the other three hunters made it in and we all got acquainted.  It was going to be a rough day on the following day.  When we got up at 5 a.m. EST, there was a full fledged blizzard in force.  Wow, everyone stood around after the outfitter said, “Well, what do you want to do?”  No one wanted to say forget it, and so out we went.  This was really tough and the temp went well below (0) F and the wind howled.  We were positioned  at different positions and the trackers could not even find a fresh track.  We gave up by 10 a.m. A nap felt good.

Next day it was still cold, but it had cleared and we were back on the trail hiding while the trackers tried to deliver an opportunity. 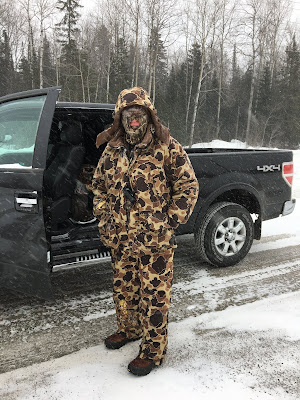 This is what I look like when all covered up.  We rode in a sled pulled by the snow mobiles and this is the reason for the ski goggles.  You can also put your hand in front of your face, but you still get covered.  One important thing I did was purchase Toasty Toes from Bass Pro and pasted them on the bottom of my socks.  They kept my feet warm.  When your feet are warm you can take a lot of snow, cold and wind. 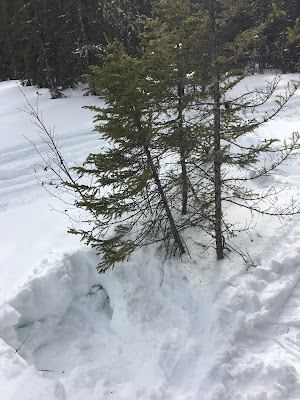 Typical hole stomped down and bench below the trees to sit on.  Upper left you can see where the snow mobile dropped me off.  A guide would always check to make sure my radio was working, then it was sit and wait, and be very still.  Keeping hands warm is also important.  I wear a thin pair of gloves in case of a shot, and mittens used by the ice fisherman.  A packet of Hot Hands also from Bass Pro was inside the mittens.  Feet and hands were always warm.

This was a great location and after everyone was settled, the trackers moved into the woods and bait sites to start moving the wolves if they were in a group.  Most of the time it was a single wolf that they were disturbing. 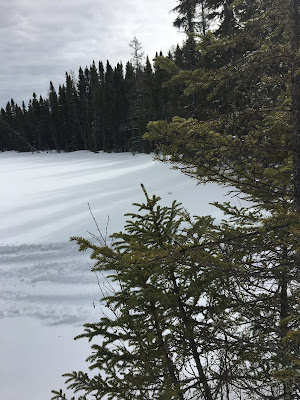 Looking off to my right was the directions the wolf would have come if it ventured out of the timber.  I was positioned  at a good location if the animal veered off the line of the push.

Nothing happened and the sun shining down on me just made me sleepy.

On this particular day we must have moved over five times.  There was a dusting of snow and tracks were easy to spot near and around the bait sites.  This meant loading up the rifles into the cases and crawling back into the sleds.  Also, we had to unload when moving and reload when sitting down.  Fortunately, my partner and I were of considerable weight and that made the sled settle a little for a smoother ride.  That is the good news.  The bad news was more snow was kicked up into our faces and covered us with snow.

I am on the right side of the sled with the ski goggles on.  I wore a mask covering my face with holes for nose, mouth, and eyes.  On top of that was a wool cap that pulled down over my ears and down the back of my neck.  It was billed, so that helped keep out glare.  Then my hood which is really thick was pulled up on all of that.  I was told by an old cold weather hunter, you lose most of your heat through the top of your head.

My partner had a shot at 100 yards and missed.  I felt really bad for him.  He was a very experienced hunter and was really sick about the shot.  The wolf came out of the woods on a slow gallop and with their big padded feet they do not sink into the snow.  He spotted it and drew on it and said the bullet kicked up snow below the animal.  It happens to all of us periodically, but that is still little consolation.

Next day after changing sites several times I was with one of the guides on a river bank.  The tracks and beds had been found and we were positioned in a relative direct line from the tracker.  Even though the guides and trackers are talking to one another you still don’t know where they are going to pop out of the woods. 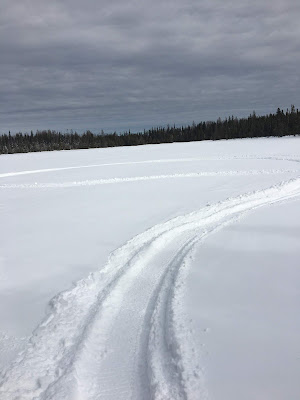 This is a riverbed and the guide and I climbed up a river bank into some timber.  The guide was positioned near me off to my left.  We waited.

We waited, and waited, and he told me that a couple of weeks previously a wolf was shot just as he came out of the woods straight away from me.  Not on this day.  Three came out 600 yards from me up the river in a line on the move.   I shoot a 300 Win Mag Model 70 with Nosler 180 gr Partition bullet, but I have never shot at anything that far away.  The guide hollered, “Shoot anyway, you might get lucky.”  “How?”was going through my mind as I lifted the rifle to my shoulder, raised it up a couple of feet, and let the first round go.  The guide hollered, ” Again, again!” The same process was done on the second.  The wolf rolled, and the guide was hollering, “You got him! You got him! Go for the third.”  The third animal was heading back to the woods and had hit the afterburners.  I sent the round anyway, but that was a clear miss.  Back to number two. He got up as I fumbled around getting another round in the chamber, but he made it to the bank and was gone.

The outfitter and my guide were right up on the spot looking around but did not find any blood.  He obviously was not hit and maybe was just winged or the snow blowing up in his face caused him to roll.  They spent thirty minutes going up the bank and looking for signs of blood.  There was none. It’s called hunting, not shooting.

On our final day there were no sightings although there was a lot of tracks. 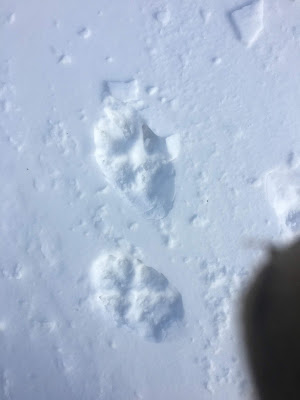 Wolf tracks along the roadway. 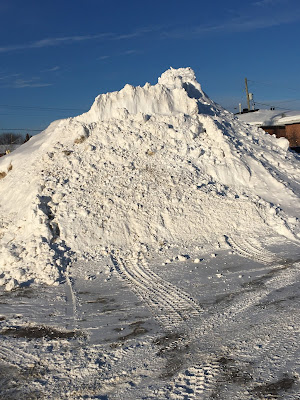 I just put this picture of the pile of snow on a street corner.  They do get a lot of snow in Ontario. We called this Mount Ontario.

Getting back home felt really good, and I have to admit this was the most grueling experience I have every had. The cold was very manageable, but the deep snow was a bit of a problem to move around.   My friends and my wife all asked me if I would do this again, and the answer is yes.  You only live once.

Something to do is to read my book while we wait for the Corona virus to disappear. Click on the book and buy from Amazon.