Three miles north of Council Bluffs, in the colorful Loess hills, is a farm that is more akin to a meat market than a farm.  Besides the landowner, I am the only person who has a key to get into the ground. Turkey and deer abound and whenever up at the farm you always see plenty of animals.  Over the last four years I have hunted one spot with outstanding success.  That success is due to the decoy Funky Chicken Turkey Decoy.  Adding a couple of feeder hens nearby helps provide serenity and calmness to the area. I bury myself into as much cover as possible, and wait 30 minutes for the forest to calm down.  When I hear the music of birds and see deer running across the fields in front of me, I give a couple of clucks on the call, then just wait and read a book and try to stay awake.

On this trip the farmer was running cattle in the area I wanted to hunt so I had to go to a different area of the farm.  With all the birds I saw on this piece of ground, so what.  All that was needed was to get old Funky out in the open where he can be seen by the Toms.

An old turkey hunter told me years ago to quit getting there early before they come off the roost and just be set up by 8 a.m.  He said most big turkeys are shot between 8 a.m and 2 p.m.  I am sure  people have had different experiences, but this was what worked for me.  It had rained during the night and it was really windy when everything was in place.

The waiting game was on, but nothing appeared, except a few hens.  There was a lot of gobbling early but by 11 a.m. it had almost died out.  The wind picked up to a minor gale and nothing appeared in the field ahead of me.  Then a light mist developed.  Hunting in the rain for me is no fun so it was time to fold up.  Tomorrow is another day.

Day two was similar to day one, but without all the wind.  There were low clouds and it looked like rain at first.  Up the valley was an area I’d never hunted so I  decided to head uphill toward the end of the valley.  It narrowed up rather quickly, but in the past turkey and deer had been seen traversing the area and going over the hill at the end.  Even though it was partly cloudy, a big beautiful blue sky developed above that and let a lot of sunshine into the valley and illuminated the Funky.  That was really great.  Turkeys have phenomenal eyesight and the fact that Funky was not in the shadows but showing up and showing off made it a good possibility. I said quietly to myself, “Bring them to me Funky.” 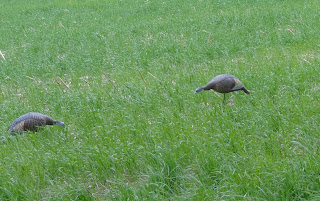 I use two feeder hens about 5 to 10 yards to one side of Funky to add a sense of calmness to the area.  This was recommended by the manufacturer of the Funky.

Pushing myself into some standing timber and brush put me in the shadows, and with my leaf suit I was well hidden.  Now came the waiting, but for entertainment, a book was right there for me to read. 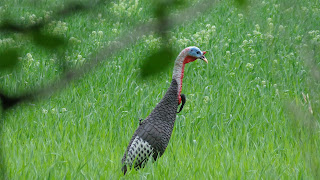 There he is doing his turkey thing.  I may be giving away my age, but do you remember the Charles Atlas advertisements in boys magazines that attempted to sell muscle building schemes for skinny boys? The advertisement promoted how to stop getting sand kicked in your face by a big bully. The big shots are coming to kick sand in his face.

Down the hill from where I was hiding, some jakes came up the hill, but turned away from me to follow a path made by the farmer’s four wheeler.  They were way too far for a shot.  Some hens also followed, but the jakes were probably afraid of Funky.

Day three was a beautiful morning.  I set up a spot earlier  than I had done the two days before.  Maybe my friend was a little off his rocker when he said, “Don’t get set up till around 8 a.m.”  A few gobbles greeted the morning and some geese were flying over, squawking away.  At least 10 deer were seen as they nibbled their way across the valley where I was hiding.  The wind was from my left and a couple stopped and stared straight toward me, stood there, then walked off.  Something just was not quite right.  Even though they could not smell my scent, something just wasn’t quite right.  It was me.  No Toms appeared and only one more day was left before the season closed.  Staying later in the day did not produce any action. 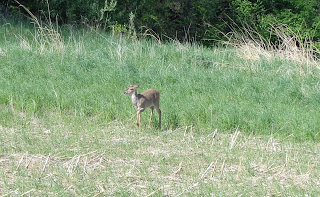 It has been four years since I did not wax a nice edible tom turkey on the first day.  Iowa has four seasons and you buy a separate tag for each season.  Again, the old turkey hunter had told me to hunt the 4th season because it is longer, there is not a lot of pressure then, and the hens are mostly bred out.  He claimed the toms are still looking for a suitable mate to add to their harem.

It was another beautiful morning and getting on site early might be helpful.  This location faced toward a dam holding water from a  stream in a deep gully. With open field to my right and the steep uphill valley to my left, this was not only the best location, but there were three avenues for the toms to get a look at Funky Turkey Chicken decoy.  This was my last day, and there was a feeling of great hope.

Pushing back into the timber and brush, the sun would be right behind me when it came up and filled the valley.  I would be in the shadows, however.  After waiting the usual 30 minutes for the woods to settle down, the birds began singing and the squirrels were scurrying around.  A fox walked right in front of me not more than 50 feet.  A slight breeze was right in my face, and that was good.  Nothing in front of me could wind me.  It is not smell that spooks turkeys, but movement.  Keeping the area calm is important to give the big boys security.  I fell asleep. 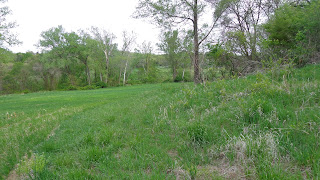 Looking to the right, this area was pretty open and I had to push back into the timber. 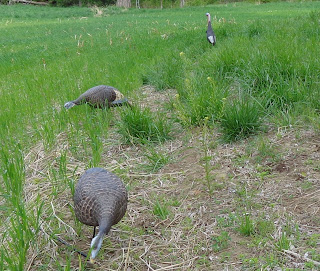 There is the funky at the top and his two ladies grazing away.

There is nothing like a nap in the woods.  The temperature was very pleasant, and then as my head bobbed around, I looked up to see a nice looking young boy with his feathers all fanned out.  This was not a big tom, but respectable and he would eat good.  Guessing he was about 35 yards out, he came towards Funky to clean some clock.  Now, a very slight movement was required as the piece was slowly lifted to my shoulder gradually. I was a little exposed, but wearing the leaf suit had worked before.   He was very cautious, but kept coming.  In the past, a few had come running to do battle.  I said to myself, “He is either an experienced fighter, or he is scared out of his feathers.”

Things got heavy as the wait was on for an easy shot.  At about 15 yards, the time had come, and he was plunked.  The farmer, upon hearing the shot, came up on his four wheeler to take a look.  Then it was off to his kitchen for coffee and to sit and visit a while.  I also had 15 pounds of elk meat for him as he and his family enjoy wild game.

Not a giant, but he will eat good.

My book makes a great gift for those who like to hunt.  Click on the book to order from Amazon, or go to my website, (www.outdoorswithhank.com)