Wow, Wow, and more Wow!  It just can’t get much better than this.  My guide and I hit the lake really early. With this fantastic weather, the lake would be packed, and it was a Saturday. Pam backed out and said , ” I am sleeping in in this morning, but be back by lunch.”  It is like people have been locked up so long and needed to get out and with this weather and lake conditions, it was time to go, and catch some walleye. The wind had moved southeasterly with a front about 100 miles out.  The beautiful weather was going to change and we needed to get on it before the front arrived and the conditions changed. The wind was forecast-ed to switch to the east with low clouds, mist, and rain.  Been there, done that, and it turns off.

We got to the boat ramp before anyone else got there,  and that helped a lot getting on the lake.  On the water the guide hit the pedal and off we went flying across the water to another fishing spot he knew about. 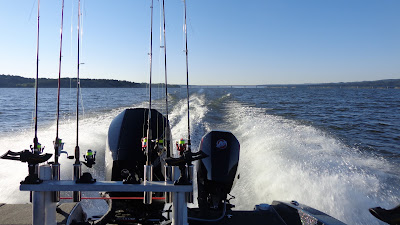 Looking out the back of the boat, and this is what 50 mph looks like as we sped across the water. 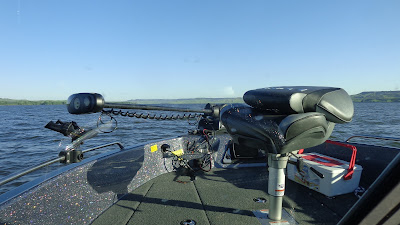 Looking out over the bow of the boat.  This machine really flies and it does not take long to cover a lot of water.  The white box with the red handle is a box holding crawlers or as we say in Iowa, worms. Around the edge of the box is a liner for ice and that way the bait is kept cool.

We pulled up to the first spot and began fishing.  Immediately the action started, but we were throwing them all back as we just could not catch a 15 inch fish. I had not hammered fish like this in years. The rods used were light action and were long, but it still felt like we had a really decent size fish.  I think I mentioned in the previous blog that this lake should be a really hot spot for legal fish next year. 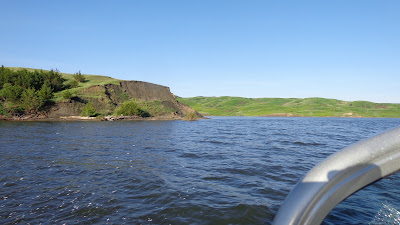 Spot one we fished for about 30 minutes along the face of the drop off starting from the point and working along the bank.  What was really interesting was that we were so close to the edge of the bank and still fished in 10 to 12 feet of water.

It was time to keep moving.  It was not for not catching fish, it was for not catching legal size to keep.  Again, the big motor was fired up and off we flew across the lake to another spot.  Decades ago, my son and I fished Canada waters with a friend from northern Minnesota.  He always said when you pick up small walleye, move, because that is all you are going to catch. 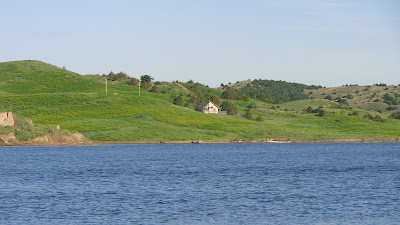 Notice the house along the bank.  The question I asked was how can a person build a house or cabin along ground that belongs to the government by way of the Corp of Engineers.  Apparently it was built about the same time the reservoir was completed and just got grandfathered in.  The guide wants that house and if I win the lottery, I have promised I will buy it for him.  Neither one of us will lose any sleep over it.

I have fished and hunted with a lot of guides, and I have never had one that was not good.  I have really enjoyed his company, plus harvesting a lot of  game and enjoying the outdoors. We fished really hard at this location as we  had success there before, but today it was fleeting.  We did not catch a thing.  It happens, and it is called fishing, not catching. Onward, upward, and ever forward.  There is always another spot along this wide and meandering lake. 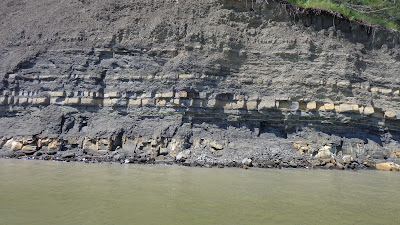 This was really interesting and it was the only place where we saw this geology.  Notice the color of the water.  It is similar to the color of the rocks.  As you moved out away from the bank the water darkened up to the color of the rest of the lake.  Depth at this level was around 15 feet.  It was at this level we caught keeper fish.  I am forwarding this picture to a geologist and have him tell me about the rocks and the layers.  Interesting.
We were not limited out yet, but had two more fish to go.  All of a sudden it shut off.  I have seen this happen before, but have no explanation for it.  The only thing I can think of is walleye are finicky fish and something turns them on and then turns them off.  The wind did go down and the late went flat.  I did not like that environment and neither did the guide. We moved to the east side of the lake. 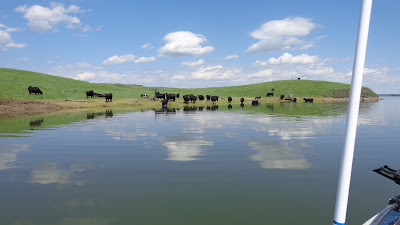 The graph and trolling motor moved us along the bank in 15 feet of water.  Then the cattle that were up on the bank came down and paid us a visit.  We caught no fish here, but as we moved by they all stood and stared at us as some waded into the water.
We continued down the east bank.  Where the grass was standing, we finished out our limit and it was only 11 A.M.  The graph displayed 10 feet of water and we were about 10 feet from the grass line. I did not get a picture of this, but we both agreed the bait fish were hiding in the tall grass and the game fish were working that weed line.  We had a great time catching and pitching.  Some of them were bigger than what we had in the live well.
Pam and I each came away with a possession limit of Missouri River Walleye.  We might come back this fall.  The best part of this trip was my wife was fishing with me again and enjoying herself.  A really great motel that was like an upscale hotel in a big city made the difference. 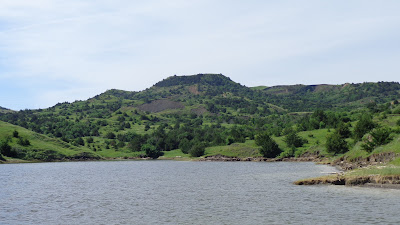 I just put this picture in because it was such beautiful scenery.  Picture Lewis and Clark going up the Missouri River and seeing this rise in the land. 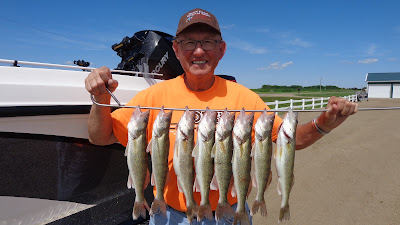 Click on the book and go direct to Amazon and buy my book.  Makes a great gift and read about the wild and crazy things I do.
Posted in Uncategorized.