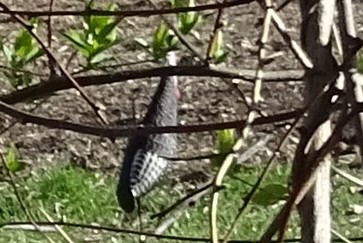 There he is doing his job.  The Funky Chicken Turkey Decoy getting ready to suck in the big toms.  They see this little guy and they come right toward him to kick the living daylights out of him. Read on.

This was almost like poaching.  Never in my life have I had such immediate success. The opening sentence should be the weather was cold, the wind was blowing, and it took me 30 minutes to find a suitable place and it was over in fifteen minutes.  There is more. 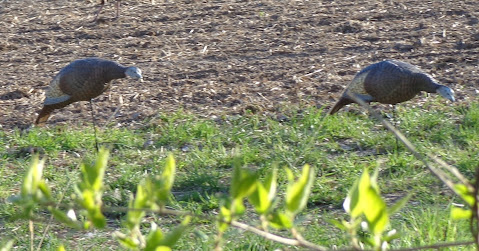 I put two feeder hens just about 6 to 10 feet from Funky.  I was told this adds the feeling of safety to the immediate area. Read on it gets better.

North of Council Bluffs in the Loess Hills lays a farm with a creek running through steep and rolling hills with woods, pastures, and grain fields.  This has all the mix for a good turkey population.  Decades ago, an old turkey hunter told me to hunt the last season because the hens were bred out, and the boys were still looking for a romantic relationship.  His theory was they will come to a call if the hens were in a more receptive fashion.  For years I used that theory and it served me fairly well. 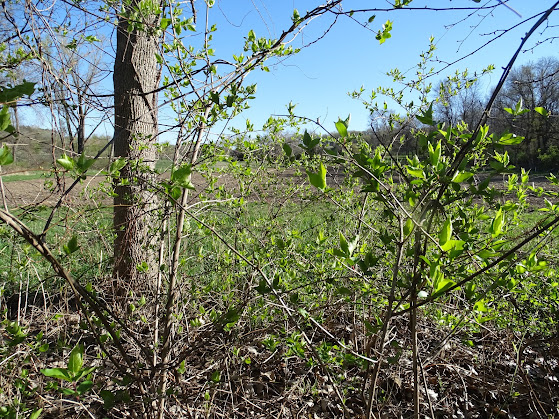 Looking straight ahead.  The decoys are to my right and the timber is much thicker.  I have learned over the years to be concealed and do not move.  Those beady little eyes can spot the slightest movement and spook them every time.  We will discuss their eyesight a little later.

Second, he said most really big toms are harvested between 8 a.m. and 1 p.m.  Again, this theory served me well, plus you do not have to be out there in the early morning light when they all come off the roost. Everyone has their own theory along with tried and true methods. Turkeys are cautious creatures.  Their wariness and then lack of it cease to amaze me.  It is called hunting, not shooting.

Things changed for this season and due to unexpected personal circumstances, the first season was the one that would be hunted and it only lasts four days.  I never have hunted it before.   Next change was the landowner wanted me to hunt in an area never hunted. He had started running livestock on my previous locations.  Up on the side of a hill with timber behind me, was my favorite location. Just inside the timber line it was dark and bushy and made for an excellent hiding place. It was here that I had used the Funky Chicken Decoy for the first time and found it to be dynamite.  The toms on spotting it would come on a straight line right to the decoy to kick the daylights out of it.

For the last six years my method of hunting was to be at that location in Iowa’s last season.  Adding a couple of feeder hens off to one side would provide calmness to the area.  After setting up, waiting 20 minutes, a couple of clucks and yelps were given and a few other calls, then I just sat there.  Falling asleep was a problem, but a book was always brought along where reading with no interruptions could be done quietly and serenely.

The east side of the farm was new to me.  Climbing up a slight incline to a semi-level area, it looked really meager to find a location.  Finally, a deer stand was spotted and below it and on either side was brush and small trees.  A hunter in a leaf suit could hide in the location and not be seen, providing he did not sneeze or have to play dog to a tree. The Funky Chicken Turkey decoy was set up about 25 feet away.  He was illuminated in the sunlight as the sun was coming over the hill and the woods to my front and right.

The hiding spot was a little open to my left, but forward there was plenty of cover and almost too much to shoot through.  To my right and up a slight hill was lots of brush and a big tree with a deer stand.  Visibility was poor to my right, but I was well hidden.  Now to sit and wait. 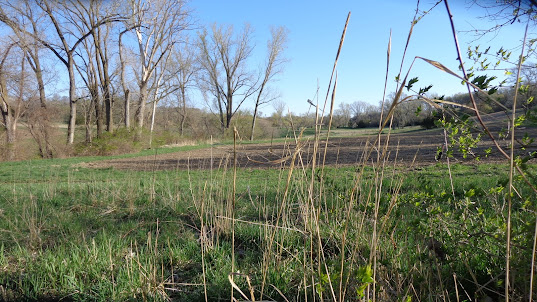 This is looking to my left. It is kind of wide open, but I have a lot of cover to my right and front so if a big boy comes up the hill from the right he may not be spooked.  I wear a leaf suit and I am totally covered. Now just to stay awake.

Up the hill to my right there was a lot of talking with hens and toms.  The hens were inviting the big boys to come up and see them sometime, and the toms were gobbling away saying, “Here I come my darling”.  That is what I was told one time.

Across the field to my front and way off in the distance were three big shadows working their way straight toward me.  Those were toms and as they came closer, one stopped and stretched out his neck and was staring straight at my location.  I said to myself, he has spotted Funky and will soon be coming.  The three of them went back to scratching and feeding, but kept moving straight toward me.  They were big, but were in no hurry.

Shifting my focus to the Funky just off to my right was a great big tom walking right around my decoy.  Three other toms were waiting their turn and approached cautiously.  Behind the toms were anywhere from 15 to 20 hens all scratching and pecking away.

I started the movement of slowly sighting in the big tom.  I ignored the other three.  All four of the birds were within 30 feet of my location.  Cautiously and very slowly, when the big boy was off to the edge of the Funky, he was put in the kettle.

Now what is really interesting, I looked at the other three and they did not take off.  Thrashing around, getting the camera up and trying to get pictures through the bush, they had to have seen me, but did not leave.  When I got up and stepped out of the brush, they took off and the hens ran off like the woods behind me were on fire. 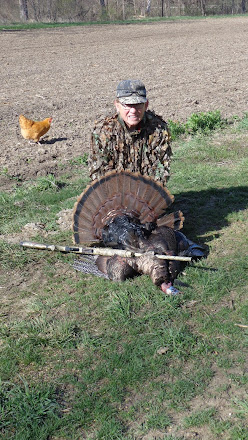 A good looking boy and he will eat well.  Notice the chicken in the background.  The best part of being on this farm is the entertainment supplied by the resident rooster.  He crows a lot and if you get too close he attacks.

The hunt had started at 9:00 a.m. and the bird was dispatched at 9:15.  Big breast and nice and fat, he was really healthy and had a ten inch beard and weighed 20 pounds. 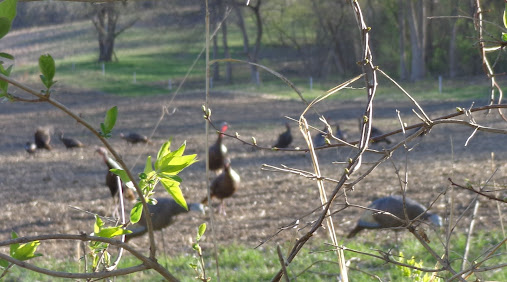 As I stood up to pick up the tom, the other birds just kept hanging around and did not take off until I stepped totally out of the cover.  I have had jakes hang around a bit and then split, but it was like these birds did not want to leave.

This was so much fun that the next morning the same spot was tried again but only with a camera.  This time all that happened were five hens arrived, but they were not interested.  Another interesting item, all the turkeys talking were noticeably absent.

Trigger more aggressive behavior from any gobbler during the spring mating season with the flextone Funky Chicken Gen II Turkey Decoy.  Click on the pic to buy from Bass Pro.

My next outing is fishing walleye in South Dakota.  If the Canadian border opens up, it is up to Alberta for moose and Canadian Grey Wolf.

Click on the picture of my book for a good read.  It makes a great gift for your friends who hunt and fish.

Good hunting, good fishing, and good luck. Stay safe my friends and get out among the wildlife.