This is one day last year, and this is the goal for the first day of this year.
How sweet it is.

The dam was authorized by the Flood Control Act of 1944. The Corps of Engineers began construction of Fort Randall Dam in 1946. President Dwight D. Eisenhower threw the switch that started the first power generating unit in 1954. The entire project was completed in 1956 with a maximum depth of 140 feet. Lake Francis Case covers just over 100 miles and has a shoreline of 540 miles.

I have quit counting the number of times we have fished this reservoir.  The goal is walleye and while not big, they are in abundance with sizes in the 16 to 17 inch range.  That size of fish produces an excellent fillet, and meat is what it is ultimately all about.

END_OF_DOCUMENT_TOKEN_TO_BE_REPLACED

Opening day of the 2022 turkey season in Iowa, I confidently purchased the initial season.  This is a risk as it only lasts three days, but my confidence was high.  I am the only hunter allowed on this ground other than the land owner and it is a general meat market.

There is my man “Funky.”  He is doing his thing standing like a statue waiting for some big tom to come and beat him up.  He has a defender, however sitting back to the one side of the tree, and if a tom gets close, he goes to the oven.

An old turkey hunter told me that most big toms are harvested between and 8 AM and 1 PM.  Over the years, I have found this to be true and no longer get up before it is daylight to be on a spot before they come off the roost.

On the farm just before 8 AM, I was set up by 08:30.  It is mid April in SW Iowa and there is little cover as the cold has lasted later than normal.  What is really interesting is we only had one snow storm, otherwise there was no moisture.  If  you are farming this is not good.

END_OF_DOCUMENT_TOKEN_TO_BE_REPLACED

Canada supports the second largest gray wolf population in the world, after Russia. Wolf habitat is diverse in this large country where, historically, wolves ranged in most areas. Currently, wolves in Canada occupy approximately 90 percent of their historic range. The 10 percent of Canada without wolves is primarily near the southern border, except near Lake Superior where wolves still live.

This is the second half of the combo hunt.  I had already harvested the moose in short order and now it was the wolf hunt.  I was teamed up with a gentleman and his wife and their goal was a mule deer.  The area abounds with mule deer and the biggest whitetail deer I have ever seen.  The deer hunter was after a trophy.  The plan was for me to hunt moose early, and then ride along with the deer hunter while we looked for deer.  Later in the day toward evening, we would head back into the scrub, wooded areas, canola fields and areas where the oil people had equipment.  Then it was moose time.  This was the plan until I bagged a moose.  Then, I would be hunting wolf the rest of the time.

On the third morning I bagged my moose and so from now on, it would be wolf time.

Not a big moose, but the smaller ones have not had years of testosterone running through their veins.  We have already had some, and it is outstanding.  Absolutely no game taste to it at all.  Almost like eating premium beef.

END_OF_DOCUMENT_TOKEN_TO_BE_REPLACED

With my vaccination record and a Covid test prior to reaching the border, it was off to the Spirit River area in Alberta Canada.  Over 2,200 miles one way, it took a mere three days of driving.  The drive was enjoyable and seeing all the country we rarely hear about added pleasant memories to the trip.  Crossing the border at Sweetgrass/Coutts got me into Canada.  At the kiosk on first entry, my passport, proof of at least two vaccinations for Covid, and the completed test for the virus at least 72 hours before crossing was required.  Then they asked me where I was going, what I was going to do, and when I would arrive there.

Next step was to go into the administration building where my contract with the outfitter was examined and my paperwork to bring a firearm into Canada was examined.  The final step was to pay my fee to bring in the firearm and off I went.  Total time was about 30 minutes.

END_OF_DOCUMENT_TOKEN_TO_BE_REPLACED

Display in the Gardens with a Shinto Shrine on top.

For an entire weekend in October, Lauritzen  Gardens grounds was alive with merriment as guests celebrated the joys of autumn and experience the Japanese culture first-hand.   My wife is a member and we go to the gardens whenever there is a program.  This one was special since several years ago we spent three weeks in Japan on a tour.

END_OF_DOCUMENT_TOKEN_TO_BE_REPLACED 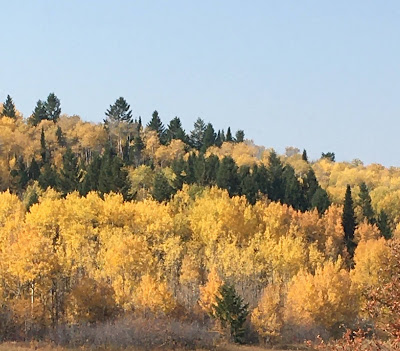 The Aspen trees are in full bloom with the coming of fall.

It is here.  The season hunters have all been waiting for, “Fall.”  It arrived September 22nd, and one of the first signs is the turning of the sumac.  Fishing is really picking up now and will be good through October, if you can put up with the cool to cold weather and the windy conditions that go with it.  I have one friend that fished South Dakota and had outstanding catches of walleye and perch.

We who live in the northern hemisphere have probably all noticed longer days and shorter nights in the summer and the opposite in winter. This phenomenon occurs because the Earth’s axis is not straight up and down at a 90 degree angle, but it is instead tilted a bit.

END_OF_DOCUMENT_TOKEN_TO_BE_REPLACED

We needed one more fishing trip up to Lake Francis Case before calling it quits, and this day was day two.  The month of June was a beautiful month and the severe heat was coming that we all experience during July and up into August.  The fish keep feeding, it is just that they go deep and seem to be more spread out.  Anyway this is the feeling of the guide we have fished with for several years.  He was born, raised, and worked in the area all his life.  He is no stranger to Lake Francis Case.

This was day one of the trip. END_OF_DOCUMENT_TOKEN_TO_BE_REPLACED

My wife said she would make the trip with me to Platte, SD to fish on Lake Francis Case.  The lake is part of the Missouri River system of dams and lakes that provide some of the finest walleye fishing in America.  Her only requirement is for good weather and she will even tolerate windy days.  Cold and wet is a no go situation.

Just as you enter the town of Platte, you are greeted with this antique sign in outstanding condition.  Plus, there is the original gas station.  I showed that pic to some friends and they said the sign if in good condition is worth some change.

The lodge put us up at the new pheasant lodge they had just purchased.  Pam had never seen this before and was astounded this first class hunting lodge was on the prairie of South Dakota and no one knew about it.  Great rooms and we had the entire run of the lodge.  There was another couple there and we visited with them about the fantastic setting of the lodge.  We did supply our own meals, and our local grocery store deli has pre made meals that supplied us with all we needed. A micro wave was available so we are set with meals. END_OF_DOCUMENT_TOKEN_TO_BE_REPLACED

Here it is.  The chariot that will carry us to glory and lots of walleye.

This is South Dakota.  Weather in this state is chaotic.  The blow out period moved the low pressure out, and this is generally not good for fishing.  We still had a high overcast, but the wind came up and began to blow.  This is where an experienced guide shows why we pay them for this service.  We went fishing in the big Lund as it made its way up the lake.  The guide had been in this type of weather before and knew where to go.  Twenty minutes after launching we moved into about 4 to 6 feet of water and started to fish.  It did not take long and we picked up a couple of keepers. END_OF_DOCUMENT_TOKEN_TO_BE_REPLACED

Here it is, boys and girls, the Berkley Flicker Shad that we caught the majority of the Walleye.  Just click on the picture and go to Bass Pro and buy several in case you lose a couple.

The reservation was made in February of this year to fish our favorite lake on the Missouri River.  Lake Francis Case is the large, gently winding reservoir behind Fort Randall Dam on the Missouri River in south-central South Dakota. The lake has an area of 102,000 acres and a maximum depth of 140 feet. Lake Francis Case covers just over 100 miles and has a shoreline of 540 miles.  With all that shoreline, this reservoir is a regular walleye factory. END_OF_DOCUMENT_TOKEN_TO_BE_REPLACED