A friend asked me one time, “How do you get to do all that big game hunting with no complaints?”  The answer is simple.  My wife enjoys traveling and likes to go to far away exotic places. I like to go too.  Time is taking its toll on us and we want to get in as many trips as possible before it is too late.  A travel company we have used several times had a guided trip to S.E. Asia that lasted 21 days and visited four countries.  Vietnam, Cambodia, Laos and Thailand were on the agenda.  We signed up and left January 30th just before all the severe cold hit our area.  Vietnam was the first stop.

We arrived late afternoon in Hanoi after 30+ hours of travel including layovers.  Exhausted, we grabbed a quick bite at our hotel and went to bed.  The next morning we embarked on an orientation tour of this French-accented city with broad tree-lined streets and colonial architecture.  The streets were not clogged with automobiles.  Everyone rides a motor scooter and there are thousands upon thousands.  It is the way the common man and woman gets around the country.  Automobiles are for the rich and these are the people that make up the government.

We visited first the resting place of Ho Chi Minh and entered into a secured area.  Pictures were not allowed at the front of the tomb or inside.  The body was encased in glass and preserved like that of Lenin in Moscow.  Guarded by four guards we walked through and then outside into gardens in the area.
Ho Chi Minh’s home, automobiles, and other structures were nestled among the beautiful gardens.  The tour continued and we passed Hoan Kiem Lake in the heart of the city, where legend has it that a deity rose from the lake in the 1400s and reclaimed the magic sword of Emperor LeThaiTo, which he had used to drive the Chinese from Vietnam. A memorial is erected on the shore of the lake to Senator John McCain for the work he did in helping open up trade with Vietnam. 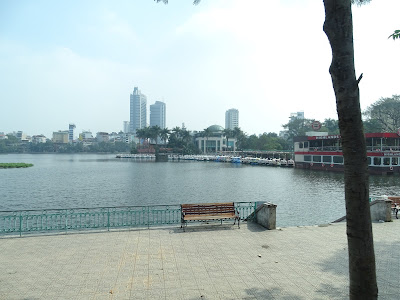 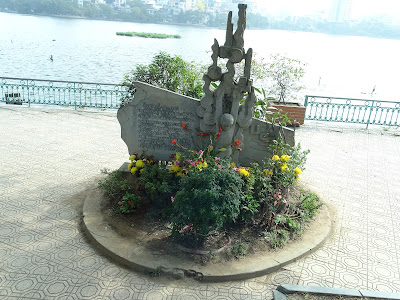 Next stop was the Temple of Literature, founded in 1070 and dedicated to Confucius, which later became Vietnam’s first university and today remains an active place of worship.

Lunch was on our own, and recommendations were made by our guide.  Pam and I found a pastry shop overlooking the street and square where a Catholic Church stood.  On the third floor we could look down on the populace and all the activity in the market.  There are very few cars in Hanoi.  The primary method of transportation is the motor scooter and they are thick on the streets with no traffic control of any kind.  People just manage themselves with no road rage at all.

Our next stop was the Hoa Lo Prison, also known as the “Hanoi Hilton.”  The prison was established over 100 years ago by the French and was infamous for torture of the local population.  Throughout the Vietnam War, and for many years thereafter, the North Vietnamese Army controlled the prison and held American soldiers captive in order to torture and interrogate them.  Only 25% of the original prison is still standing.

This wrapped up the first day in Hanoi, Vietnam.  Still suffering from the travel time, we flopped into bed as there was an early trip planned the next morning.

We departed early the next morning by coach to Ha Long Bay (Bay of the Descending Dragon). We made a stop first at a business that farms oysters and harvests the pearls. The oysters are processed and sold as food.  The pearls are then graded and set into jewelry.  The farm operates an outstanding jewelry store specializing in of course pearls.

Ha Long Bay is Vietnam’s legendary and beautiful waterway sprinkled with some 3000 islands and islets, and surrounded by a fairytale landscape of limestone cliffs, secret grottoes and hidden caves. 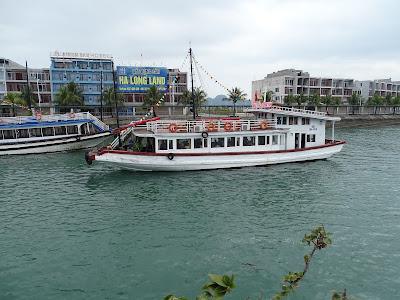 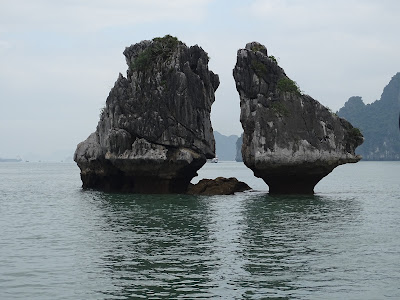 A UNESCO World Heritage site, Ha Long Bay was the home of ancient cultures dating back 25,000 years.  Our tour here included a ride on the placid waters aboard a traditional “junk” and a lunch on board of local seafood specialties.  After touring we checked into our hotel overlooking the bay and enjoyed another outstanding Vietnamese dinner.

We flew this morning to Vietnam’s third largest city, Da Nang, situated at the mouth of the Han River on the country’s south central coast.  Upon arrival in Da Nang, we enjoyed a lunch at a local restaurant, then checked into our riverfront hotel in Hoi An.  Hoi An was originally the commercial capital of the Cham people before seeing a succession of Dutch, Chinese, Portuguese, and Japanese traders all contribute to the building of the colorful old town which is now a UNESCO World Heritage site.  These days the streets belong to pedestrians and bicyclists as no cars are allowed in the old town.

We continued on our tour and headed to the airport for our 1.5 hour flight to Siem Reap in Cambodia.  On the way we stopped at the beaches of Da Nang.  This was a recreation spot for our soldiers during the war.  Our guide said that the veterans that visited could not believe how much it had changed since the beach was now lined with upscale hotels.

This was the end of the day and it was time to head to the airport and fly to Cambodia.  Our Vietnam visit was over and everyone in the group was worn out.  Next was getting through the customs and immigration in Cambodia.